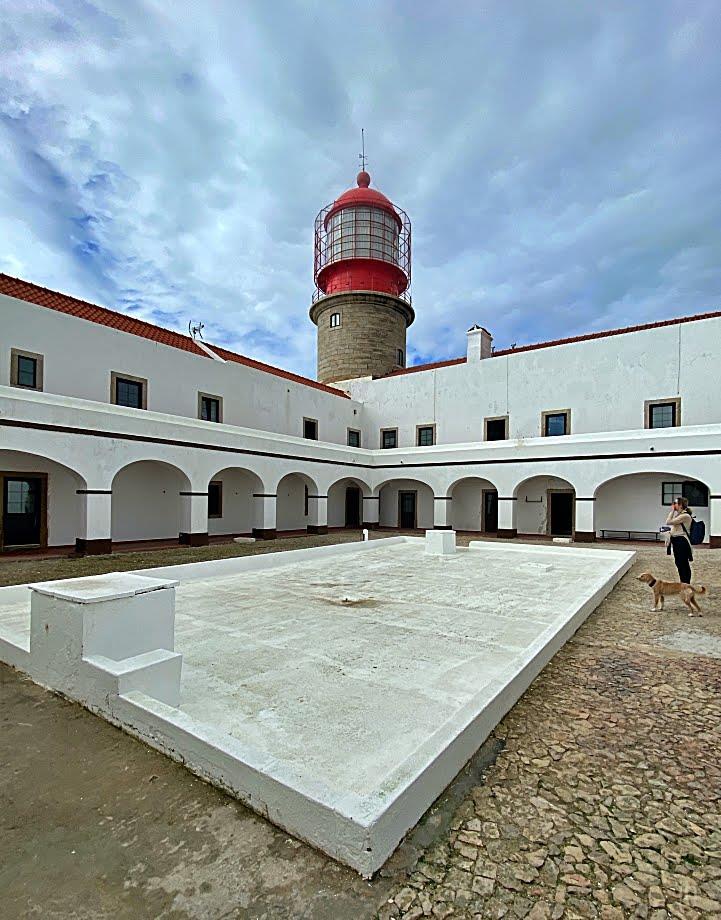 The Cabo de São Vicente Lighthouse is likely to be the first lighthouse built in Portugal. The tower construction would have started in 1515 in the monastery of St. Vicente, where a fire light was kept by the monks who used to live there and was, probably, only occasionally lit, in order to serve as guide to navigators.

Unfortunately, the monks were not so lucky in 1587, when the famous Francis Drake corsair took the convent by assault with such violence that he ended up destroying the tower, preserving only a small chapel. It would be restored in 1606 by King Filipe II of Portugal, and III of Spain, leaving the light off during this period.

After undergoing several reconstruction attempts, which were never completely concluded, the Cabo de São Vicente Lighthouse, as we know it today, was ordered to be rebuilt, by Queen Maria II, in 1846. The records show that the first characteristics of the light was “white with a full rotation of occlusion during two minutes and 2-second flashes in the intervals provided by 16 of Dr. Argand’s lamps equipped with silver-galvanized copper reflectors (…).The lighting is by olive oil, generally of poor quality requiring the lighthouse keepers to clean the wicks four times during the night.

The rotation of the equipment was by means of a clockwork mechanism and the lighthouse had a range of about 6 miles”.
In accordance to records, an inspection made in 1865, by the Hydrographic Engineer Commander Pereira da Silva, mentions that the Cabo de São Vicente Lighthouse, the first seen light in Europe to navigators that come from South America and west Africa, needed new carers, although it had two keepers…

“The lighting is by olive oil, generally of poor quality, requiring the lighthouse keepers to clean the wicks four times during the night, (…) it rains in the building everywhere (…), the iron balcony around the lantern and the cramp-irons that hold the masonry together are rusted and eaten away (…). I counted seventy broken glasses in the lantern (…). The lamp reflectors were dirty (…). (…) the bracing and the balcony are in such a stated that they have to be held up by pieces of wire and ropes, meaning that cleaning the outside of lantern’s glasses is both dangerous and almost impossible (…). Lastly, everything conspires against the purpose of providing light that this lighthouse is supposed to fulfil, which originally had a range of 30 miles, whereas it now offers not more than 16 miles and very little splendour in the interval of the occlusions, (…). In view of foregoing, it is of the greatest urgency that the apparatus now installed be replaced with a hyper-radiant apparatus of the latest system adopted, with an internal diameter of 2.66 m, rapid, very powerful flash structure and pivot, and mercury float, to meet the needs of shipping so important at the point, thus putting an end to the rather unflattering comments entered in the navigation log books.”

Given the decay of the lighthouse and the resulting poor output of the lamp that it supported, in 1987 the dismantling of the existing lantern and major repairs took place. This included changes to the tower, increasing its height by 5.70 m.

On March 25th 1908, after the conclusion of repairs, the lighthouse began to operate with the hyper-radiant apparatus. Indeed, a 1330 mm focal-length Fresnel lens was installed – lending it hyper-radiant characteristics –. It consists of three optic panels of 8 square meters and a height of 3.58 m, floating on 313 kg of mercury that rotate by means of a clockwork mechanism. The installed light source was a constant level 5 wick lamp that some years later came to operate with paraffin vapour incandescence.
According to official notices, the lighthouse characteristics consisted of group flashing every fifteen seconds, having a range about 33 miles

Until today, the Cabo de São Vicente Lighthouse continued to be modernized: In 1914 a foghorn signal was installed; In 1926 the lighthouse was electrified with diesel generators, the light range increased to more than 35 miles and the previous system of petrol gas became the reserve light source; In 1947, through the use of panels designed to deflect the light rays, it became an aeronautical marine lighthouse, a requirement of aeronautical navigation during the period following the Second World War. In 1948, it was connected to the national electrical grid; In 1949 a radio beacon was installed and remained in operation until in 2001, when it was taken out service, as it was no longer of interest to navigation; In 1982 and since then, it was equipped with several automatisms and new technology.

The Cabo de São Vicente Lighthouse is still equipped with a focal distance of 1.33 metres hyper-radiant Fresnel lens, producing a single white flash with a period of 5 seconds and a range of 32 nautical miles, being the biggest optic of all Portuguese lighthouses and one of the biggest ten in the world.

The lighthouse’s architecture tried to keep the trace of the houses at this region (western Algarve). Due to the Atlantic winds blow and inland mountain climate region, here, the houses are generally simple or non-sophisticated, built in lath and plaster or stone, undecorated and only whitewashed, with roof terraces of Arab inspiration, which served as look-out points to watch the sea and fishing boats bringing their catches ashore. They also provided a private space on which to dry fruit and fish, and to rest on hot summer nights.

The Promontory of Sagres and Cape of St. Vicente cannot be decoupled from Henry the Navigator and Portuguese Discoveries. Records says that It was probably on July 26th, 1415, while on his way to conquer Ceuta, that Henry the Navigator first saw the Promontory.
From that moment on, Henry’s relationship with the Algarve region strengthened. In 1416, when he was entrusted with the provision and defence of Ceuta by King João I, the villages in the algarvian coast provided excellent support to the North African fortress. Meanwhile, Henry’s increasing contact with the local population would almost certainly have awakened his interest in the region’s maritime activities – tuna and corvine fishing, dyeing and Mediterranean commerce – and its economic potential.

Furthermore, as the interest in Atlantic exploration grew, the Algarve played a significant strategic role. In 1443, Henry received from his brother, the regent D. Pedro, a letter of donation granting him the Cape of Trasfalmenar (Cape of St. Vicente) and about two and half miles of the surrounding area, comprising the region of Sagres. Fully aware, probably since 1415, of the navigational contingencies caused by the strong dominant winds of Sagres, Henry soon realized the need that ships, crossing the cape, had to remain sheltered in bays and coves of that region. The wait for favourable winds could last long periods which made it necessary to provide these mariners with provisions and religious support. On the other hand, the Sagres coast was a strategic, and almost mandatory point of passage for ships sailing between the Mediterranean and the North Atlantic. Its proximity to North Africa also provided further advantages. Thus Henry’s interest in the Sagres region, where he would later found a fortified village that allowed both support and defence to navigation, Cabo de São Vicente Lighthouse.

Other historic recorded myths and tales described that Cape of St. Vicente was also already know since Classical Antiquity, where Greek and Latin geographers have described Sagres and Cape St. Vincent as the finisterra of the inhabited world (Ecumene).
By this name, the Greek and Latin geographers were attributing it, not only more than a geographic description, but also a mythical symbolism that has lived on.

The geographer Strabo (1st Century BC) gave us one of the most complete descriptions of the area comprised between the Strait of Gibraltar and Cape St. Vincent. However, it was Avieno in his Ora Maritima, written in the 4th century AD and ultimately based on a commercial circuit of the 6th century BC, who provided the oldest known description of this region.
Avieno describes this finisterra as the region of the Cynetes, referring to Cape St. Vincent as Cabo Cinético. Facing it, there was a promontory known as Sacro (Holy Promontory). Both were places of worship and home gods, devoted to Saturn.
Due to their natural characteristics, the Sagres and Saint Vincent promontories were an ideal place for the home and worship of this god. It is believed that prior to this roman cult there were other rites and deities associated with this place, such as the Punic god Baal Hammon, which was later associated to the Latin god Saturn Through a relatively common process of syncretism. Thus, very likely, the Sacro Promontory and the present day Cape St. Vincent housed an open air temple or sanctuary, as the cult was practiced outdoors. Furthermore, some authors believed that the cult of Hercules (also related to the Carthaginian god Melkart) was also relevant in this place since, according to the mythology, he had remained for a long time in the outer regions of the Ecumene – the known inhabited world at that time.

Considered, ever since Antiquity, a sacred place of worship, this area’s religious nature may date back to the Neolithic period, given its clear relation with the menhirs of Vila do Bispo and Raposeira, also linked to cult practices and the rituals of space. In fact, the toponym Sagres probably derives from the distortion of the Latin designation Promontorium Sacrum.

A place of memory and worship, the Sagres Promontory and Cape St. Vincent still maintain this religious feature till this day, in a constant dialectic relationship between myth, cult and reality.

The state of preservation lighthouse and the efforts that have been taken to conserve it. This may include alternative uses.
Since the construction of the first tower, large efforts were made to maintain the Lighthouse history and also in use, although all the constraints already mentioned. Over the years the number of lighthouse keepers who lived in the lighthouse grew. However, with electrification and automatisms installed, currently the Lighthouse has only four lighthouse keepers and their families living there permanently, and awarded part of the space to serve as coffee and souvenir shops.

With regard to its current state, it needs some conservation works, namely, repairs on the tower and a museum reconstruction, which has the purpose to make known, not only the evolutionary chronology of the lighthouses, but also the history of the Cabo de São Vicente Lighthouse and of the Maritime Discoveries of the 15th and 16th centuries.

The Portuguese Lighthouse Authority is also currently developing a project to recover some decayed buildings, currently not used by the keepers, with the goal of improving the services provided, such as offering, school-age youth and disadvantaged children, with a sleeping space, outdoor activities, Algarve lighthouses visits and maritime knowledge.

The efforts that have been made to facilitate public access to the lighthouse and/or to educate the public about the heritage of the nominated lighthouse as well as the wider context of aids to navigation.

The Cabo de São Vicente Lighthouse, located in most southwestern tip of Europe, is an icon on Algarve tourism. The lighthouse and its museum are open to public every day, and the tower is open every Wednesday’s afternoon, without booking. It is estimate that the number of annual visitors to the lighthouse, and surrounding spaces is more than two hundred thousand people, Last year’s records show that the number of visits to the museum was close to 14900 and to the tower was 1768 (from January to September).

The theme of the museum aims to make the evolutionary chronology of the lighthouses history known, as well as the history of the Cabo de São Vicente Lighthouse and of the Maritime Discoveries of the 15th and 16th centuries.