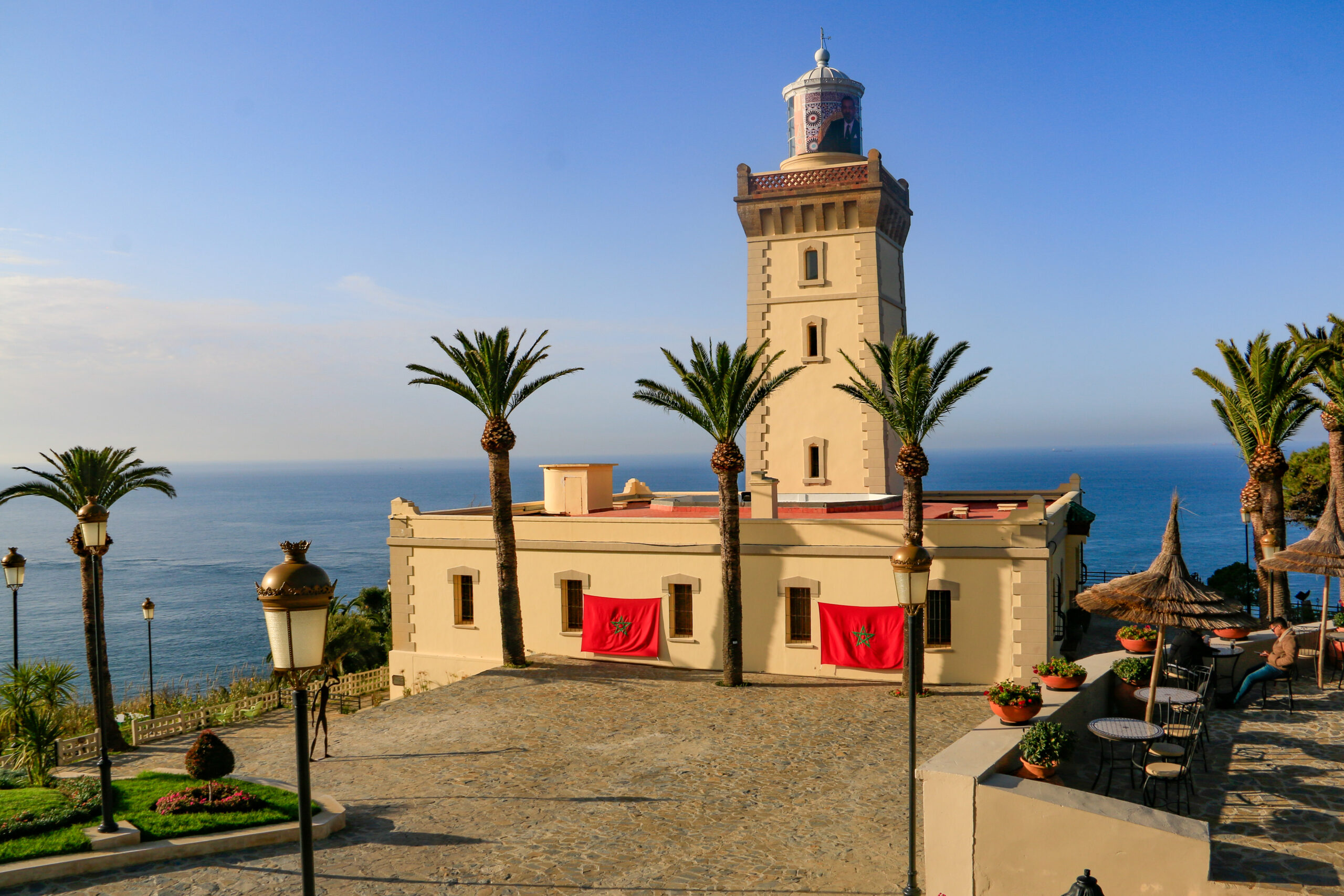 Cap Spartel Lighthouse, the oldest lighthouse in Morocco, is a national monument rich in architecture, history and its maritime role. The Cap Spartel lighthouse is located in the north-western tip of Morocco and Africa, between two seas and three continents, near the city of tangier.

It is considered as one of the most beautiful sites in Morocco, with a diversified morphology. The place has preserved its harmony with nature, combining mixed vegetation, influenced by the Mediterranean Sea and the Atlantic Ocean. The Cap Spartel and its lighthouse, often considered as mythical places, are the pride of the region.

Its construction was ordered by the Sultan Mohammed IV Ben Abderrahman at the request of the consular representatives of European authorities after numerous shipwrecks in the strait of Gibraltar. It started in 1861 and lasted for two years, and then it took another additional year to adjust the optical apparatus and the rotation system to the multiple cast gears.

Further information can be found here;

The Cap Spartel Lighthouse is the oldest lighthouse in Morocco; it is located 14 kilometres west of Tangier on the same road that leads to the caves of Hercules, at the North-western point of Morocco and Africa, where the Mediterranean Sea meets the Atlantic Ocean. It is one of the most beautiful sites of Morocco and a platform of encounters and multiple influences. The Cap Spartel lighthouse is a strong symbol of rapprochement between Africa and Europe and crystallizes the role that Morocco has played in securing this area.

The lighthouse is characterized by a rather wide base, inspired by that of Hispanic-Moorish mosque architecture. Its shape is a typical square minaret of the Maghreb, 31 m high. It has a spiral staircase of 101 steps, with mahogany handrails, giving access to the lantern of the lighthouse, which accommodates the optical system. At the end of these staircases, there is a space that offers a superb panoramic view of all the city’s beaches.

The building is located in a very aggressive environment. The lighthouse requires regular maintenance. Therefore, it has been the subject of various restoration operations; the most recent of which were carried out in 2018 and 2021. The works of this restoration preserved the original characteristics of the building and safeguarded the authenticity of its Moorish architecture, as a heritage asset of the history of the city and the country.

The Cap Spartel lighthouse building houses the Museum of Moroccan lighthouses. The museum offers an educational experience on the maritime history of Morocco and promotes the role of navigation aids and their technical evolution over time.

Beyond its maritime dimension, this lighthouse carries a legend according to which the water of its fountain would have therapeutic virtues. The late Abdellah Kaaboune, long-time keeper of the Cap Spartel lighthouse, claimed that this water, rich in iron, cured asthma and that his father and son testify to this, since by drinking the water from this source, they were cured like others before them.

 1860 : The spectacular sinking of the Brazilian frigate ,Dona Isabel, caused the death of 250 cadets;
 1861: Construction of the Cap Spartel lighthouse began on the orders of Sultan Mohammed Ben Abderrahmane. The work was financed by the Moroccan government and directed by a French engineer, L. Jacky, assisted by a specialized local workforce;
 1863 : completion of works ;
 1864 : importation of the lighting equipment and its adjustment in the lighthouse; the lighting was provided by oil lamps;
 1865: Morocco, the United States, Austria, Belgium, Spain, France, Great Britain, Italy, the Netherlands, Portugal and Sweden met at the Belgian consul’s office on May 31, 1865 and concluded a convention in seven articles concerning “the administration and maintenance of the Cape Spartel lighthouse”.
 1892:creation of a semaphore post which sent visual signals for the ships in daytime ;
 1905 :Oil lighting and creation of the famous “diaphone” at Cap Spartel (Anti-fog siren) ;
 1914 :increase of lighting power of the lighthouse from 6000 to 20000 candles;
 1926 :Restoration of the building ;
 1931 : Increase of the lighthouse power to 300000 candles ;
 1933 :installation of a sound system useful in case of fog;
 1937 : addition of a radio beacon to allow ships to determine their location;
 1950 :Use of electrical energy ;
 1952 :Installation of radio transmission (transmitter) ;
 1954:Transformation of the optics of the lighthouse and increase of the power of the light (6000 Watts lamp);
 1956 :The management and maintenance of the Cap Spartel lighthouse are transferred to the government of Morocco;
 1964: The lighthouse celebrated its centenary on 15 October and a stamp was released for the occasion
 2013 :Refitting of the lighthouse building ;
 2014: The lighthouse celebrated its 150th anniversary and a stamp was issued for the occasion;
 2018 : Redevelopment of the lighthouse building;
 2021: The Cap Spartel Lighthouse was opened to the public on July 2021

The efforts that have been made to facilitate public access to the lighthouse and/or to educate the public about the heritage of the nominated lighthouse as well as the wider context of aids to navigation. Since 2011, the Ministry of Equipment and Water has created an exhibition to explore the wonderful collection of objects from various lighthouses of Morocco. This exhibition has been opened for special events and specific audience, such as:
– Visit for the participants of the “Aids to Navigation managers” training 2017-2018;
– Forum on historical lighthouses in 2016 ;
– 150th anniversary of the lighthouse -2014;
– Twinning agreement between the Cap Spartel lighthouse and the Mamelles lighthouse in Senegal.

On July 2021, the Moroccan lighthouses museum was opened to the public in Cap Spartel building. This Museum offers to visitors an educational experience on the maritime history and promotes the role of lighthouses and their technical evolution over time.
Indeed, the Cap Spartel Lighthouse Museum has several spaces with specific themes :

Location of the lighthouse
The Cap Spartel Lighthouse is located 14 kilometres west of Tangier on the same road that leads to the caves of Hercules, at the North-western point of Morocco and Africa, where the Mediterranean Sea meets the Atlantic Ocean. Cape Spartel is a rocky promontory located at the southern entrance to the Strait of Gibraltar, 14 kilometres west of Tangier. It rises to 315 m from sea level. The lighthouses of Cape Spartel and Cape Trafalgar in Spain, marks the passage from the Atlantic Ocean to the Mediterranean Sea.
This area is also distinguished by the quantity of caves due to ocean’s conditions. the most known and visited is the Hercules Cave. It is the largest cave in Africa and was discovered in 1906. The site of Cap Spartel is a Site of Biological and Ecological Interest of priority 3 (SIBE), in addition to being a site of tourist and historical interest, offering to the novice or experienced hiker circuits of a diversified morphology, with a rich and varied flora influenced by the climate of the Mediterranean Sea and the Atlantic Ocean.

National Honors
The Cape Spartel lighthouse has always been considered an emblematic icon of the city of Tangier, a national pride and a symbol recognized by all Moroccans. Examples of where it has featured include;