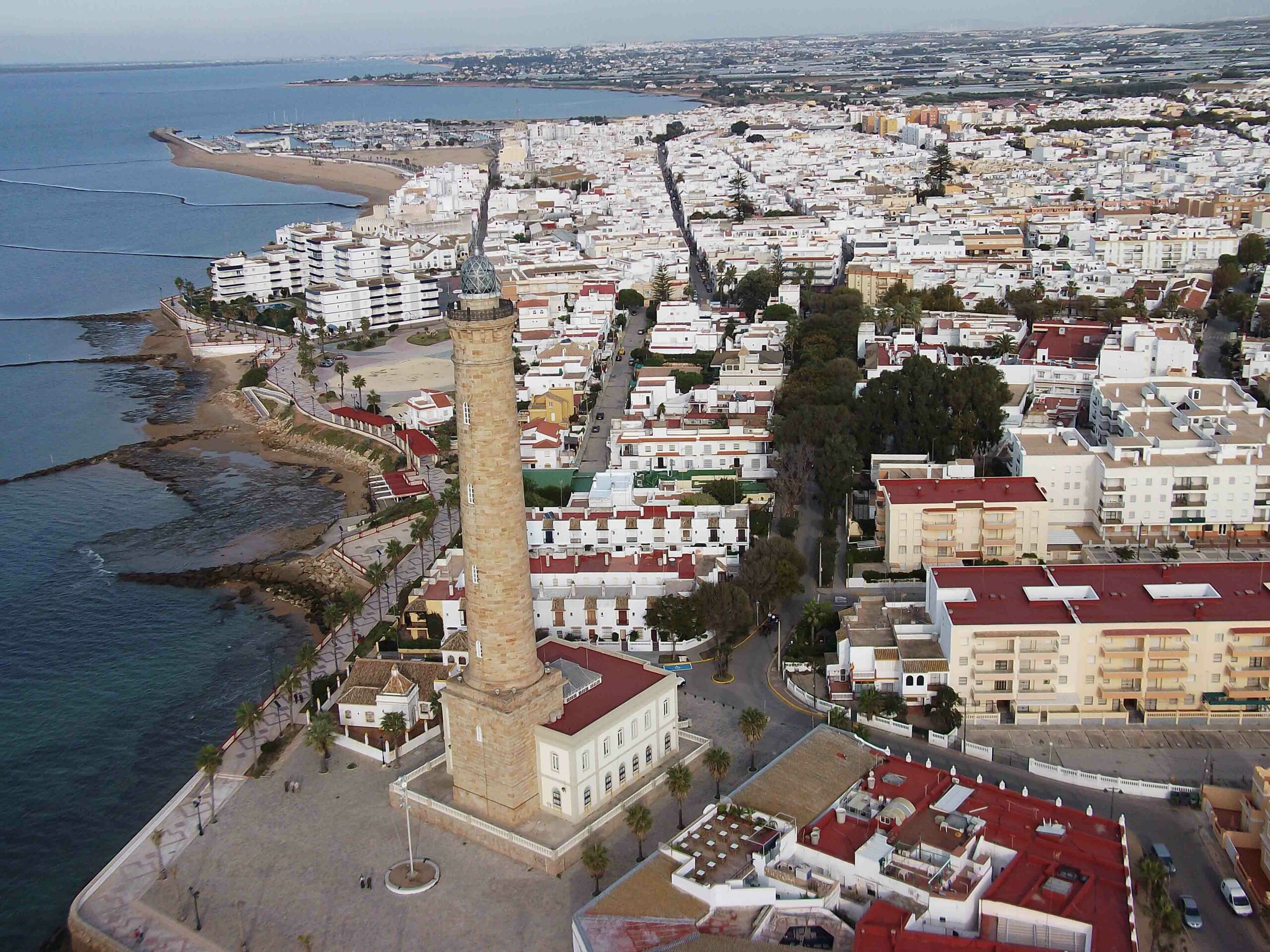 The Chipiona lighthouse was built under the direction of the engineer Jaime Font, and the work began on 30 April 1863. The director of this remarkable engineering feat was awarded the Cross of Isabel la Catholica in 1869, along with the contractor of the work, Antonio Lazo, “for the determination and intelligence shown in the construction of the said lighthouse”.

The Lighthouse was built because the navigators of the mid-nineteenth century demanded a sign that marked the dangers of Bajo de Salmedina (located 1 nautical mile in front of the lighthouse) and La Barra (a sandy and oyster stone base located between Chipiona and Sanlúcar de Barrameda), where ships that ventured into it used to run aground. For this reason, and since ancient times, the Chipiona Lighthouse has marked the entrance to the Guadalquivir so that ships can access the Port of Seville, the only inland seaport in Spain.

It is considered the tallest lighthouse in Spain, at 60 metres high from the tower, and one of the tallest in the world. It reaches 69 metres above sea level. To get to the flashlight you have to climb 322 steps and the beam of light reaches 25 nautical miles (45 kilometers) emitting white flashes of 0.3 seconds every 10 seconds.

It is built with oyster rock, a mixture of shells and sand, extracted from Playa de las Canteras, Chipiona and Rota, and on the outside, there are slabs from Tarifa and materials from Sierra Carbonera, between the municipalities of San Roque and La Línea De La Conception. When the lighthouse was being built, after the hard-working hours, the engineer Jaime Font gave geometry classes to the Galician stonecutters, so that the next day the stone cutting, and the curvature were perfect. Its tower is hollow with a spiral staircase and is inspired by Roman commemorative columns.

Its lamp was first powered by olive oil and later by paraffin and petroleum. In 1916 the old lighting was replaced by an oil vapor installation. The current lantern has been shining since 1964, it is aero-maritime, which can be seen on land and sea simultaneously, and is 3.5 metres in diameter. Since 1999, the lighthouse has a 1,000-watt metal-halide lamp and an emergency beacon.

One of the characteristics of the Chipiona Lighthouse is its status as a maritime lighthouse. Its beam of light illuminates horizontally and vertically, thus also helping the planes of the Rota Naval Base.
Since its inauguration it has never stopped working, except in 1898 during the Cuban War and in the Spanish Civil War (1936-1936) when it was turned off for 3 years.

The Chipiona Lighthouse has been managed by the Seville Port Authority since January 1, 1993, the start date of the new Law on State Ports and the Merchant Marine.

Chipiona is linked to Aids to Navigation before it was founded. In the 1st century B.C.E. A large lighthouse was built in the area of the Salmedina rock, similar to the Pharos de Alejandría, to mark the entrance to the Guadalquivir. Estrabón and Pomponius Mela called it Caepionis Turris and later it would be called Torre de Cepión. From there comes the name of Chipiona.

Immediately after the Nabussia estuary lies the double mouth of the Betis […]; it is nearby from there where the oracle of Menesteo is located, there also rises the tower of Cepión, built on a rock, which the sea bathes on all sides. This admirable work is built imitating the Lighthouse of Alexandria to avoid the loss of the sailors’ lives; because inaddition to the banks formed by the mud that the river carries, there are rocks hidden underwater in this area. Estrabón

The most important population of Chipiona in the Roman era was around the Sanctuary of Our Lady of Regla, as evidenced by the remains of the necropolis that appeared next to the Humilladero.

It was in the 19th century when the Franciscans Aracil and Martínez picked up the tradition of the locals who said that, in ancient times, there was an illustrious population there. After the flooding of the island, the surviving population settled in the area of the beaches, founding the current city. These coasts have suffered several tsunamis, the best known and catastrophic being the Lisbon tsunami of 1755.

When Seville was the Port of the Indies, ships from the New Continent were anchored off Chipiona, waiting for the tide, just like merchant ships bound for the Port of Seville do today.

At the end of the 19th century the Guadalquivir estuary and La Broa had night beacons. The first project of this type was approved in September 1899 and included the installation of 14 light buoys in La Broa and 5 in the lower region of the Ría.

Port Authority of Seville and City Council have the Lighthouse of Chipiona as the meeting venue of some important meetings with universities and others. The Lighthouse of Chipiona is a unique element that is fully integrated into the village. In fact, the Chipiona City Council, in collaboration with the Port Authority of Seville, organizes numerous activities at its facilities, such as the sports activity: Chipiona Lighthouse Vertical Race.

Nowadays there is a keeper in the lighthouse. The building is well conserved. Visitors can see the lens and the wonderful views of the Gulf of Cadiz. Port Authority of Seville has made maintenance works in the building without alter the soul of the building.

The effort made by Port Authority of Seville and City Council spreading the history of the Lighthouse of Chipiona and it link with Port of Seville, let them know how important Aids to Navigation are for vessels, even though GPS technology, the way ships ride the tide, the work made by old keepers, the reason why the lighthouse was turn off along two wars: Cuba Independence War and Spanish Civil War.

The visitor not only leave the lighthouse knowing a lot about Aids to Navigation, but also knowing much more about the history about the importance of the Guadalquivir River along the human history.

Along the Guadalquivir we find several types of maritime signals: buoys, beacons, and leading lines, which have been a fundamental piece in navigation from the beginning. Their help when lining up the boats makes them essential to reach the Port of Seville.
In addition to the Chipiona Lighthouse, a total of 90 buoys, 31 beacons and 7 leading lines guide the navigator safely. All these maritime signals are operational 24 hours a day, 365 days a year.