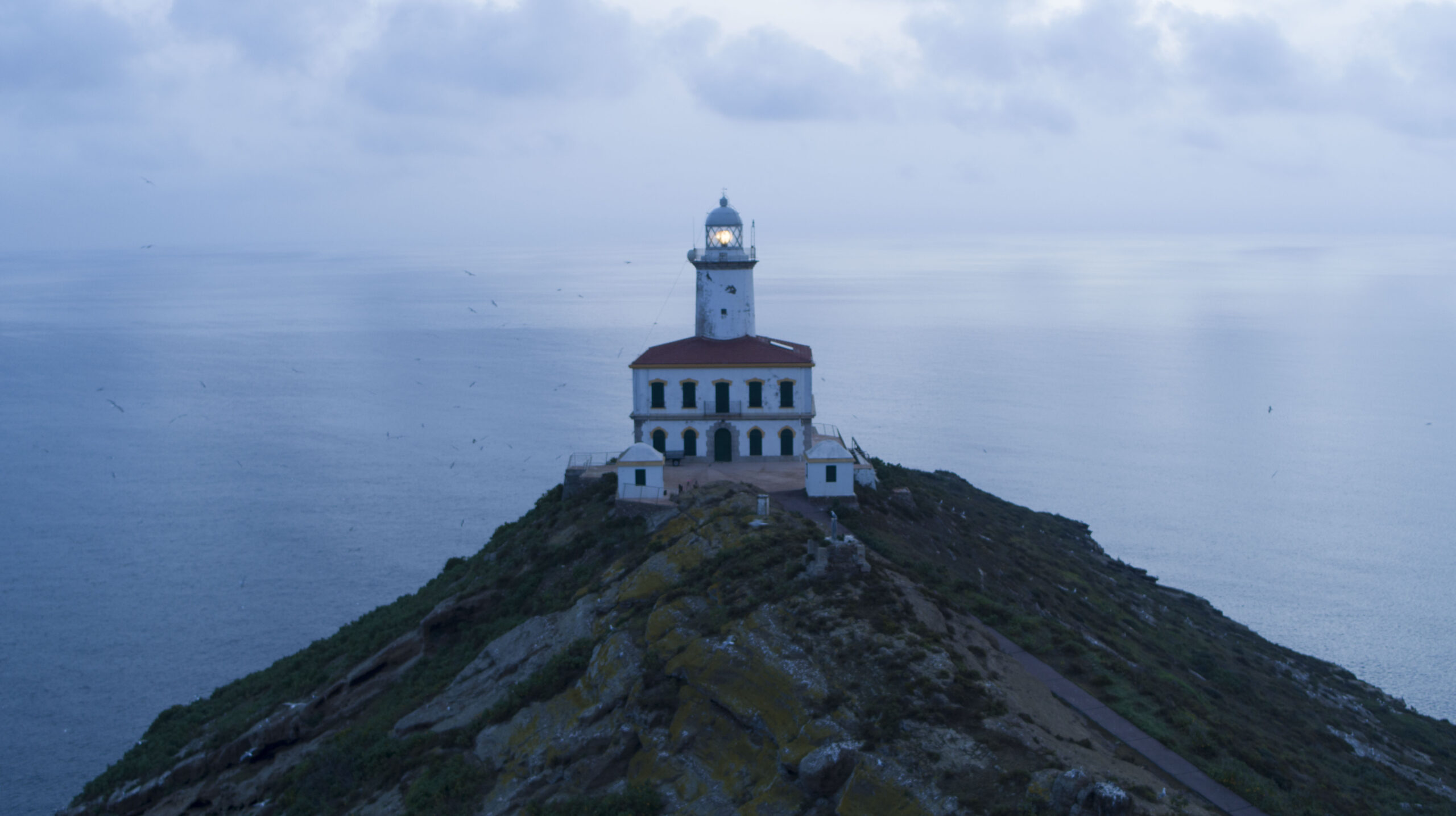 The Columbretes Islands lighthouse was one of the 126 included in the General Plan for Maritime Lighting of the Coasts and Ports of Spain and Adjacent Islands, approved by Royal Decree on September 13, 1847. Located on Illa Grossa, its construction it was started in 1856 and was first lighted on December 30, 1859, exhibiting a steady white light characteristic and an ordinary-time range of 21 miles.
It was equipped with a prismatic flashlight and a first-order apparatus, made up of three zones. The upper one had 13 prisms, the central one 17 and the lower one 6. It also had a mechanical clockwork lamp for olive oil, equipped with a four-wick lighter that, after oil, would successively use paraffin and petroleum.

On September 20, 1915, the fixed light characteristic was changed to that of groups of three occultations every 20”. Between the summer of 1916 and the summer of 1917, work was carried out to provide an upper floor to the building attached to the tower, which until then only had a ground floor. Starting in 1956, three consecutive projects were developed to automate the lighthouse. They included the acquisition of an acetylene incandescent unit with a 50-litre burner, a solar valve, an optic with a 375-mm focal length,
designed to give three flashes, and a new 3-meter-diameter aero-maritime lantern. This reform brought about the end of the permanent presence of maritime signal technicians at the Lighthouse, in 1975. For greater safety and in order to avoid incidents in the event of a hypothetical breakdown, two automatic beacons were also built at both ends of the island.

In 1984 a project was drawn up to electrify the lighthouse with solar panels, which included the installation of two solar generators and a set of batteries. Once the corresponding installation works for this equipment were completed, in 1986, the lighthouse began to work using solar energy.

The lighthouse was attended by the provincial services of the State with competences in the management of maritime signals until 1992, the year in which it became dependent on the Port Authority of Castellón.

Currently, the Lighthouse continues to fulfill its function of facilitating the location of the Columbretes Islands for sailors thanks to the different light signals it emits. It has a range of 21 miles and 85 meters of focal plane elevation. It has also been destined for scientific and informative uses linked to the management of the marine and natural reserves of the Columbretes Islands, through the formalization of successive agreements with the Generalitat Valenciana and the Ministry of Agriculture, Fisheries and Food.

The Columbretes Islands Lighthouse, since it came into operation, has been essential for the safety of navigation, as it is located in an area of dense maritime traffic, located between the Balearic Islands and the coasts of Castellón and Valencia. But beyond its importance for maritime navigation, it has two specific characteristics that make it a genuine heritage asset of special historical and cultural relevance: its insular condition and its distance from inhabited coasts – it is 28 nautical miles (57 km) from the closest point of the Spanish Mediterranean coast, Cabo de Oropesa-; and its location in a place -the Columbretes Islands and their marine environment- of high ecological value, declared a Natural Park in 1988.

The barracks, buildings in which the guards of the Nature Reserve and the Marine Reserve live and work, located on the site where the booths where the workers who built the Lighthouse lived were previously erected. The isolated situation of the Columbretes Islands also meant that the lighthouse keepers sometimes had to face complicated rescue tasks in the various shipwrecks that occurred in their vicinity, as well as take care of the aftercare of the rescued castaways, despite the limited resources (food , medicines, sanitary material…) that they had.

From this privileged situation derives the fact that since 2006 -as a result of an agreement signed between the autonomous administration, the state administration and the Port Authority of Castellón- the Lighthouse also acts as a management center for the marine and natural reserves of the Islands. Columbretes, as a scientific research center and as a center for environmental and historical dissemination and education. The lighthouse houses the Illa Grossa Visitor Center and facilities for research, made up of various work stations plus a complete dwelling.

Given its historical, architectural (representative composition typology) and technological interest, the Columbretes Lighthouse has been included in the Catalog of lighthouses with heritage value in Spain of the Ministry of Culture and Sports of the Government of Spain.

The Columbretes Islands Lighthouse is highly exposed to natural phenomena -high temperatures and high levels of humidity, strong winds, maritime storms- that throughout its more than 160 years of existence have compromised its conservation in good condition.
To counteract this problem, considerable efforts have been made. Already during the first decades of the 20th century, repair work was carried out on the Lighthouse and in the 1960s interventions were again carried out for its conditioning and conservation.

The project drafted in 1984 to provide the Lighthouse with an electrical energy supply system using solar panels also included the conditioning and repair of the building. Regarding this project, it should be noted that it made it possible for the Lighthouse to be operating with renewable and sustainable energy such as solar energy since 1986.

Another noteworthy reform took place in 2006, when the Lighthouse building was refurbished so that it could house the alternative uses already mentioned above: natural and marine reserve management centre, scientific research center and visitor centre.

The most relevant recent interventions in terms of conservation and restoration have been the following:

Several initiatives are being carried out to facilitate access to the Columbretes Islands Lighthouse and spread its
historical and cultural value:

 Guided tours: the staff of the Columbretes Islands Nature Reserve conducts guided tours, which end at the Visitor Center, located in the Lighthouse itself. Throughout this visit, the natural, environmental, human and historical values of the Columbretes Islands and their Lighthouse are revealed. In this sense, the material exhibited in the Visitor Center includes a section made up of work utensils and furniture used by the lighthouse keepers who worked in Columbretes, as well as information on the historical evolution of the Lighthouse. As a result of these efforts, since 1992, 77,367 people have visited the Columbretes Islands and 21,000 schoolchildren have carried out educational activities there. In recent years, the Islands and their lighthouse are visited annually by more than 4,000 people.

The lighthouse links in with the Lighthouses of Spain project. this is an initiative of the State Ports Public Entity, whose purpose is to develop a strategy that guarantees a responsible, sustainable and careful conservation of the lighthouses with the environment and that promotes the development of complementary activities (cultural, recreational, social… ) in headlights and their surroundings. The objective is to take advantage of the heritage and landscape attractiveness of the lighthouses and their surroundings, to turn them
into an asset that contributes to increasing the quality and diversity of the tourist offer in Spain.