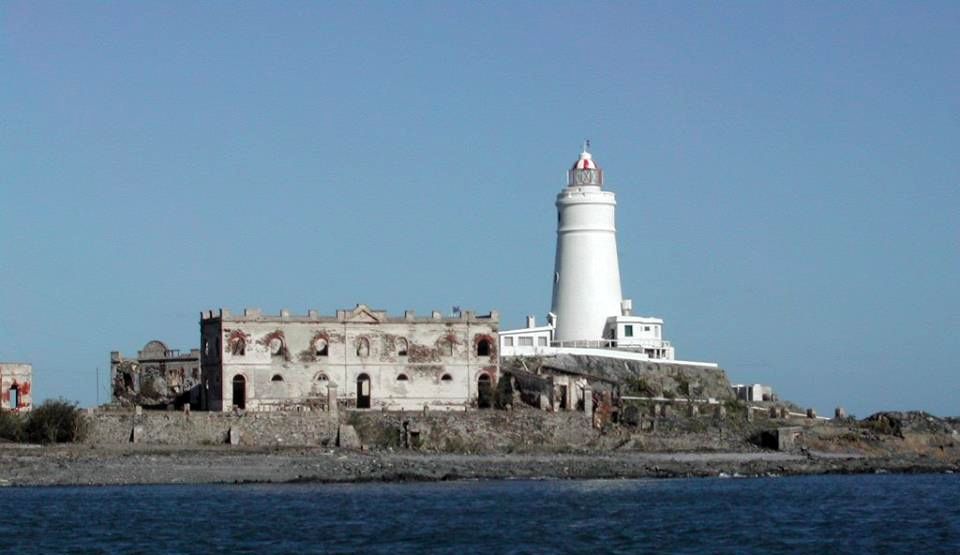 The lighthouse is situated at the entrance of Río de la Plata (River Plate) Front to Montevideo Port and near entrance to Punta Indio Channel (Entrance Channel to Buenos Aires Port).

Between 1700 and 1800 there were more than 100 tragic shipwrecks near the “Banco Inglés”. The loss of goods en-route to Spain  and then to Portugal and England was enormous.

The first light was installed on top a small building on the Island using the stern lantern of Spanish warship “Nuestra Señora del Loreto” that had been shipwrecked in 1792.

Under a treaty with the Empire of Portugal-(represented in Brazil by General Lecor) in 1819 the Provincia Oriental (Uruguay) signed a change for a big size of territory called Misiones Orientales (today Río Grande do Sul-Brazil). This treaty led to the lighthouse being dubbed “the most expensive lighthouse in the world”.

The other historic value of the Light House was as “El Lazereto” (a quarantine station for maritime travellers. From 1865 the light house keepers had the additional task assisting in the construction and control of this new quarantine station.

Since its inauguration, this ‘Most expensive lighthouse’ has been a source of Uruguayan National heritage, pride and an obligatory visit for architects, historians, school students and general public.

The lighthouse remains operational a good state of preservation – in particular, its antique stairs.

1.- Most expensive light house (the construction was change for a great part of actual Brazil territory).

2.- National heritage as a part of Island Parks.

3.- Its located in one of the most dangerous place of historical shipwrecks of Río de la Plata at the emblematic entrance of 2 countries (Uruguay and Argentina).

4.- Its construction was particular and made with the island rocks with an alternate higher strange stairs.

5.- Its still preserve in operations in same conditions of rotatory mechanisms and emergency systems with a bigger bulb lamp in a Fresnel Optical Lamp

6.- The keepers of the light house were a part of control and advisory of the ships in order to quarantine special after the lazaretto building.

The conservation efforts are greater than other light houses in the region as this is an Island so far from ports. The lighthouse retains its lighthouse keepers.  They are crew of 4 mariners, on duty in pairs for 15 days alone in the Island, followed by 15 days rest.

The keepers are proud to show the lighthouse to everybody who get the access to island provide historical information and tell the lighthouse’s stories.