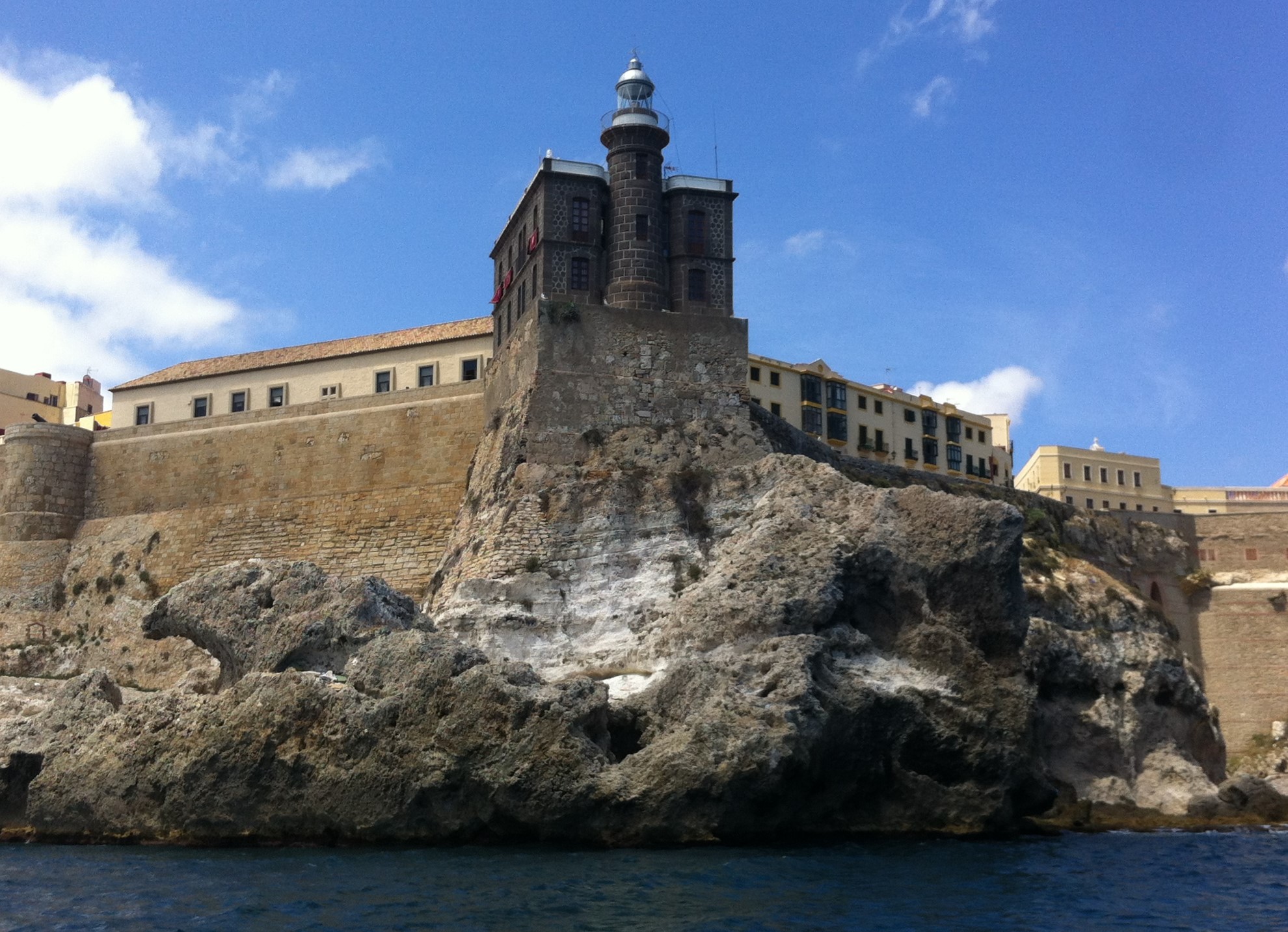 The Lighthouse was built in 1918 on the Bonete tower, on the site of a small lighthouse built in 1854, which would be called the Vigía de Mar tower in 1903.

It was built 39 meters above the sea level. This lighthouse is one of the four Spanish Lighthouses located on the coast of Africa along with the ones in Ceuta, Velez Rock and Chafarina Islands. The building consists on the main lighthouse and a house for the lighthouse keepers.

Faro de Melilla is a square building with a ground floor and an upper floor with an interior arcaded patio and exterior walls with black stone from Mount Gurugú to which is added a cylindrical tower (type B, subtype B-1), the lighthouse, with a lantern. The facades have segmental arch openings, with the keystones highlighted and the breastplate of the building being made of painted brick, instead of the original balustrade.

The lighthouse has an octagonal type lantern of 195 cm in diameter and a total height of 302 cm. The lamp had 500 candles of white light, visible at 25 miles. The lighthouse keeper Pedro López was the one who put the new lighthouse into operation.

The presence of lighthouses until the middle of the IXI century on the Spanish coast was quite scarce, being built in ports and main maritime cities, while in most of the coast the watchtowers were maintained, which with a marked defensive character were built at throughout the middle and modern ages.

The first maritime light signal construction in Melilla was erected in 1515, in the ‘Torreón del Bonete’; like that of the Bonete Chico, it was made following the guidelines set by a General Plan of Works, forming part of the towers and walls of the First Fortified Enclosure.

At the end of the 18th century, it returned to its original name (1764), ‘Torreón del Bonete’, for having a shape similar to that of the cap used by ecclesiastics and seminarians. In 1854 a modest booth was erected where the Sea Watcher was installed to announce the arrival of ships, where a lantern with a range of 4-5 miles was placed that only turned on when a ship was sighted.

Since the end of the 19th century, the existing lighthouses on the North African coast were subject to a Lighthouse Plan, which had been carried out and executed by the Ministry of War. Although in 1859 a proposal for a 3rd order lighthouse for Melilla was resent, its construction was paralyzed due to the wars in Africa (1859-1860) so as not to disturb the fragile peaceful relations after the Spanish victory.

The system was not maintained regularly and there were frequent complaints because it was not always on and was confused with the fires that the border patrolmen lit to disorient the ships.

Due to the constant breakdowns of the “Torre del Vigía” due to storms, the Melilla Excise Board in 1888 assumed the cost of repairing the tower and a new lighting device (lamppost) for an amount of 2000 pesetas. The Melilla lamppost was built in an octagonal shape and painted light blue, with an oil lamp with a fixed white light visible from 12 miles.

In 1902 the “Plan for the Reform of the Lighting of the Coasts of the Peninsula, Adjacent Islands and Spanish possessions of the North African coast” was approved by Royal Order and in that same year the port of Melilla was declared of “general interest” and the Works Board of the Port of Melilla and Chafarinas was created.

In 1910 the construction project for the new lighthouse was resumed, but the construction of the Tres Forcas lighthouse eliminated the need for a very important lighthouse, so finally the old tower was remodeled and a 6th order apparatus was attached to it, with rotating screens that would give the appearance of groups of two white occultations every 10″ . That was inaugurated in 1918. At first it worked with a petroleum lamp; later it was electrified and in 1983 a new electric lighting equipment with gas reserve came into service which would take advantage of the old 1918 Chance Brothers optics.

In 2004 the City of Melilla commissioned a lighthouse restoration project to house the headquarters of the Fundación Melilla Ciudad Monumental, which was inaugurated in August 2007.

The historical heritage of this lighthouse is due to its important emplacement. As it is mentioned before, this lighthouse is located on the old part of our city, in the exact same spot where there was the watchtower before, from 1854 till 1918, when the actual lighthouse was built. What is more, that watchtower was also used as a lighthouse from 1911 till the construction of the new one, they had to build a second floor on it to make sure it could be seen from de Cape Tres Forcas (In Morocco). As it is located in the old city it has a very important patrimonial value, as it was key for alert and defense for the cargo ships that arrived to Melilla against the attack of Rifians that tried to steal the cargo.

A curiosity about the tower is that its optics belong to the British glass manufacturer Chance-Brothers, the same company that produced the glass for the Big Ben spheres in London.

This lighthouse is one of the four Spanish lighthouses on the coast of Africa along with Ceuta, Peñón de los Vélez and the Chafarinas Islands. The building offers a marvelous viewpoint to enjoy the magnificent perspectives of the port and cliffs of Tres Forcas (Marocco). It represents excellent testimonial, representative, authentic, integrity, historical, social, artistic, arqueologic and territorial value for the city. It is one of the most historical and beautiful monuments that there.

2018 marked a 100 years since its first lighting. Although, improvements have been implemented in the interior as technology advanced, the facade of the building is preserved as it was the year of its construction.

Due to the automation of the lighthouse, the house of the lighthouse keepers became disuse. An agreement was signed later on between the Melilla Port Authority and the foundation “Ciudad Monumental de Melilla´´ which permitted the rehabilitation of the building and the adaptation of its facilities for other uses (2007).

The lighthouse is located in the old area of ​​Melilla called “Melilla la Vieja” or “El Pueblo”, an area with a high cultural value. Access is easy, so the visit is including in the route of visits to the old part of the city.

The Melilla lighthouse is classified as an asset of cultural interest. It is open to the public, upon request for a visit. The lighthouse was opened to the public on the occasion of its first centenary (1918-2018).

People can book a guided tour to watch it and it is also available for school trips, where the guides tell them the story of the lighthouse, the reasons why it was a need for the city to build it, and its old amazing architecture. Since opening to the public, more than 1,000 visits have been registered.