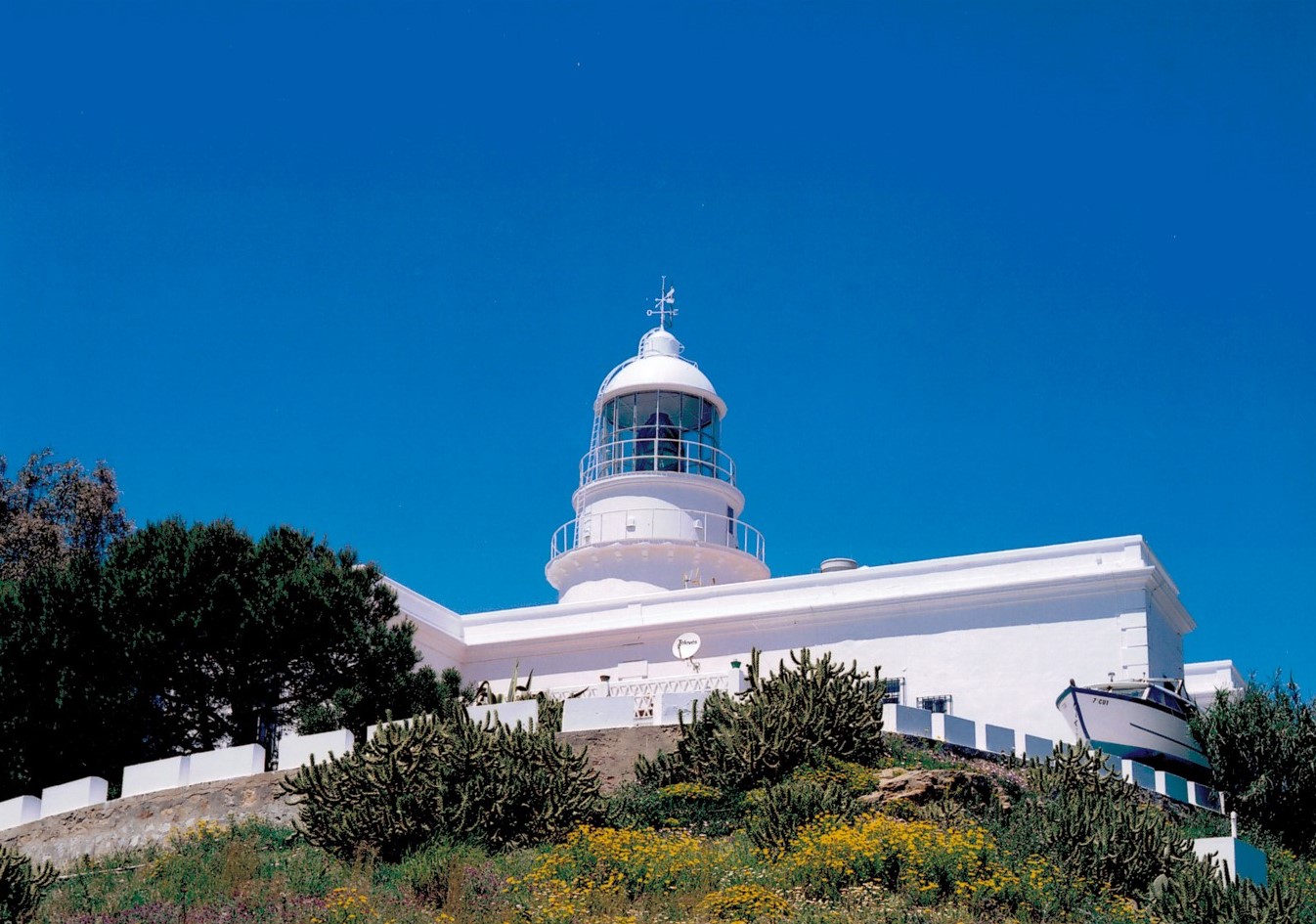 The lighthouse was designed by Juan Martínez de la Villa in 1851, under the reign of Isabel II, and financed, in part, by the Duke of Montpensier. The work was inaugurated on December 1, 1855. It is considered as the first order, rotating, white light and it offers a flash every minute, and its luminous power reaches 27 nautical miles in clear weather.

The original factory work had a square floor plan of 60 feet on each side and it stands around its cylindrical tower that is seven meters high and has a diameter of 15 feet, elevated 145.17 meters above sea level. It consists of some pavilions built for the keepers’ room, a warehouse and some deposits for the service.

In the main lobby, there is an eleven-step staircase that goes up to the chamber that gives access to a spacious roof terrace that offers distant horizons and views of extraordinary recreation. Going up through an spiral staircase, you enter a small room where the machinery that moves the lighthouse is located.

In the beginning, it worked with a mechanical clockwork lamp powered by olive oil to which a five-wick Dotti lighter was adapted, counting as a reserve with another one with a higher deposit and a constant level. In 1912, a Chance 85 oil steam facility was set up.
It had a catadioptric device from the Letourneu company with a 920 mm focal length, the cost of which, together with the flashlight, rose to 286,160 reals, being the price higher than the one of the construction of the entire building and the tower.

As a result of an agreement of the Lighthouses Commission in 1909, in 1919 it was modernized by replacing the torch with another cylindrical one with vertical uprights and 3.5 m in diameter built by “Maquinista Valenciana”. The slow turning optic was also changed and a new one made of rock crystals reinforced with copper sheets and carved by hand was set up, with a height of 3.5 meters, 700 mm focal length, with fast turning on a mercury float, from the Henry Lepaute factory, which continues in service, powered by a B.B.T clock machinery. In this way, the characteristic would be changed to that of rapid flashes in groups of two white flashes.

The old optics, in 1924, were refurbished and set up in the lighthouse of San Sebastián (Gerona). Later, it was electrified with a 3,000 W incandescent lamp and an electric engine for rotation. As a reserve, two 12 Kva Ruston groups and one 22 Kva Deutz group were set up. In November 1995, a project was carried out to “replace the electrical facility of the Punta Almina Lighthouse” in which the 3,000 W three-phase incandescent lamp was replaced by a 1,000 W Metal Halide lamp, which came into service on 27th November, 1995 and the Ruston generator sets were replaced by a 30 Kva Deutz and later a 45 Kva Gesan group was set up among other facilities adaptation works.

Currently, at the Punta Almina Lighthouse, all the Navigation Aid services dependent on the Port Authority of Ceuta are concentrated, such as the buoyage of the Port of Ceuta, the Racon radioelectric beacon that places in the radar of the ships the inlet of the port or the foghorn.

The historical relevance of the Punta Almina Lighthouse is incalculable, since it has been a witness and has been linked to outstanding historical and cultural events in the country even before the beginning of its construction in 1851.

It was on July 7, 1849, when the City of Ceuta received for the first time the visit of members of the royal house since its conquest, the Infanta Luisa Fernanda de Borbón (Isabel II’s sister) together with her husband Antonio Philippe of Orleans, Duke of Montpensier.
This visit ended up being decisive for the construction of the lighthouse, since, according to the chronicles, the Duke, after visiting the exterior lines, the Royal walls and fortifications on horseback, he moved to Mount Hacho, and, there, he was able to verify the great traffic of ships that crossed the coast of Ceuta, and the non-existence of a Lighthouse, for which he agreed with the local authorities to carry out this project.

This promise became a reality when construction began in 1851, financed in part by the Duke of Montpensier and under the direction of the engineer Juan Martínez de la Villa. It was part of the first lighting plan for the Spanish coast approved in 1847, in which more than 50 lighthouses were built in Spain. The works, whose cost amounted to 462,000 reals, finished in 1855, turning on for the first time on December 1 of that same year, providing service thereafter to date, every night from sunset to sunrise.

It is important to highlight the only blackout that the lighthouse suffered since its commissioning. You can still read in the service books used by the keepers over the years and preserved in the building, the many and diverse stories. Among them, the day on which, shortly after the coup d’état in Spain in July 1936, which led to the Spanish Civil War, several soldiers appeared at the lighthouse forcing the worker at the time to turn it off. At first, he refused, indicating that he was only following orders from his boss. After a few weeks they returned, this time with a letter and armed, so he had no choice but to turn it off, and it stayed that way for a couple of months.

Connected with the lighthouse, is the siren of Punta Almina. The frequent fog that forms in the Strait of Gibraltar supposed a danger to ships approaching the Ceuta coast, so in 1910 the Lighthouse Commission approached the military government to request that the cannon be fired whenever there was fog , with the frequency of one cannon shot every five minutes made in the middle instant between the double gun shots with the aim of firing at the Rock of Gibraltar too.

On October 21, 1911, a Royal Order approved the installation of a siren that, in 1914, was awarded to the English company Fog Signal Company for 46,300 pesetas, an amount that included air horns, oil tanks and motors to compress it, although the First World War delayed its start-up to reinforce with acoustic signals in the warning system to navigators of the lighthouse, contracting later with the AGA house in 68,490 pesetas. In 1921, the Siren building was set up 40 meters above the slope of Mount Hacho, very close to the lighthouse. It was attended by a watchman who lived in the same building during times of intense fog, from May 1 to October 1. Apart from that, he worked as one of the lighthouse workers with their normal shifts.

In 1971, it was replaced by another electric one from the same house that is managed from the lighthouse, so it was no longer inhabited.

This lighthouse is among those that formed part of the first lighting plan for the Spanish coast in 1847. It is located in one of the most important maritime navigation routes in the world, an area that joins two masses of water as important as the Mediterranean Sea and the Atlantic, which separates two continents, Europe and Africa, and which communicates with the Suez Canal.

The Punta Almina Lighthouse, even though its facilities were updated on several occasions over the years, still maintains especially old elements in operation, a reflection of the continuous efforts for its conservation and good condition.

One example is the mercury float optics and flashlight that have been in service since 1919. Regular work such as cleaning the mercury tank, corrosion control, and retouches on glazing and paint are frequent activities carried out to maintain its traditional status.

Likewise, assets of great historical value are preserved in the building, whose maintenance and good condition depend fundamentally on the technicians who live in it today. These are, among others, the old machinery, incident and service books used by the keepers since the lighthouse was commissioned in 1855, as well as various maritime signaling elements used over the years.

Likewise, its facilities were renovated and replaced by more modern ones, adapting them to current times.

Currently, the Punta Almina Lighthouse cannot be visited, since today it does not meet the appropriate security conditions in the areas of potential interest. In the medium term, one of the objectives of the Ceuta Port Authority is to be a monumental icon of the City of Ceuta.