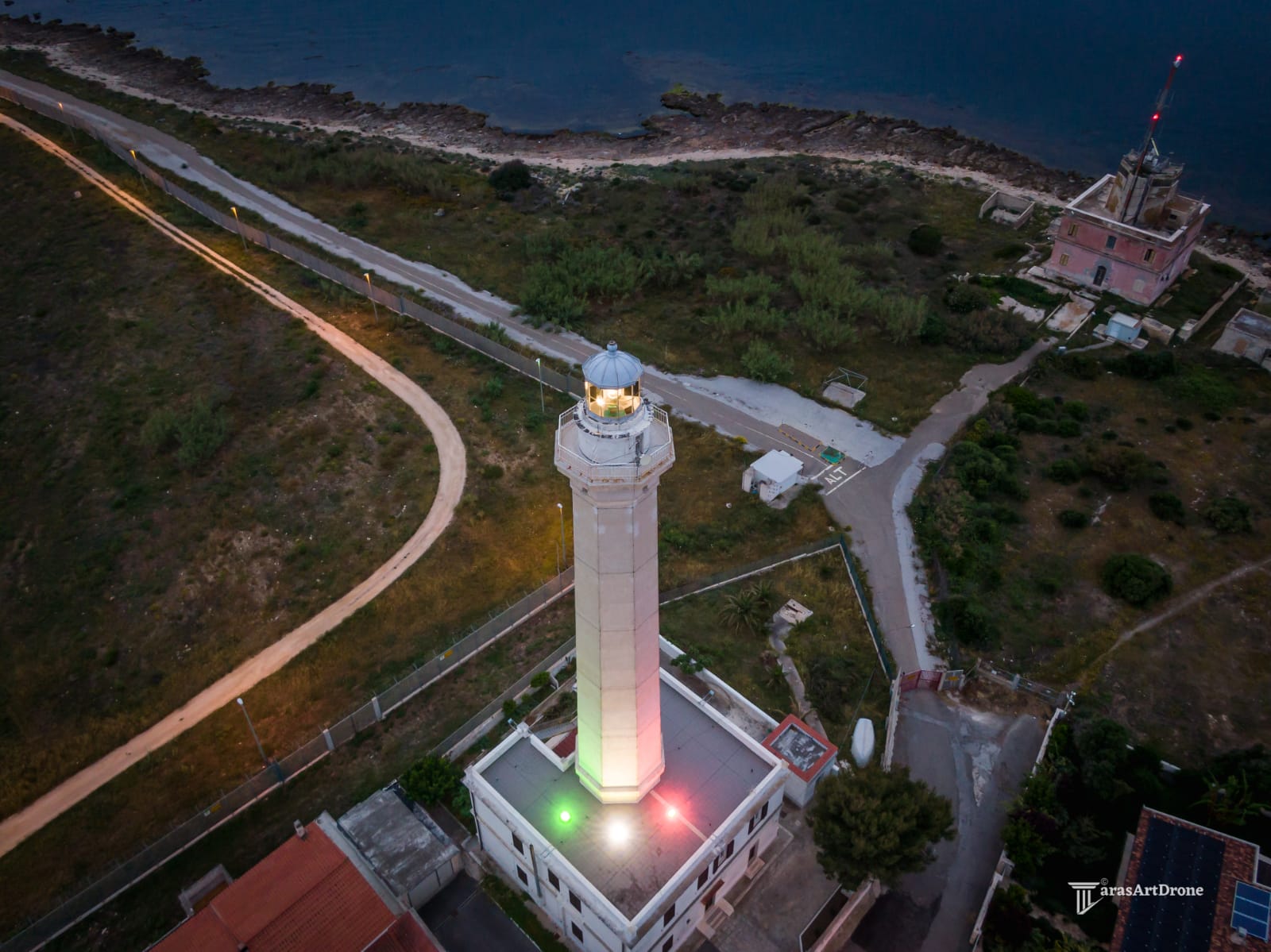 Giuseppe Blandamura, Archbishop of Taranto from 1885 to 1908, after a long historiographical research in the Vatican library, reported on official documents the attacks led by Ottoman corsairs during the sixteenth century: in 1594, Sinan Cicala from Messina, converted to Islam and Admiral of a major corsair fleet, led roughly 100 ships from Reggio Calabria to Taranto in order to besiege the town. It is reasonable to think that from the old tower, locals could spot the fleet sailing through the Cheradi Islands and Cape San Vito; this historical fact is depicted even in the poem “Glorie di guerrieri e d’amanti” by the sixteenth century poet Cataldo Mannarino: this tower located close to the current operative lighthouse is the clear testimony of the importance of the site throughout the centuries.

Mr Abena, a former keeper of the lighthouse, recently found an official document from the Government of Malta which declares that “The Italian Government has given Notice, that from the 10th August 1869, a new light will be exhibited from a tower of Cape San Vito in the Gulf of Taranto….omissis….the tower is white, octagonal, 118 feet high….omissis….The lighthouse is visible from the sea in all directions, and serves as a guide for vessels entering or leaving the gulf of Taranto.”

It is curious to report that, on the isle of San Paolo, a twin lighthouse was built in the same years and eventually demolished in the early years of the 20th century to leave room for an artillery casemate.

The lighthouse of San Vito survived through WW1 and WW2 watching over the gulf and witnessing important events of the last century such as the massive airplane attack to the Italian fleet on November 11th 1940 (the so-called “night of Taranto”) or the industrial development of the sixties which brought on an increasing traffic of vessels that nowadays counts hundreds of ships per year.

– Architecture of the Lighthouse: the lighthouse shows clearly the characteristics of the Heritage Mediterranean style, an octagonal tower with 175 steps above the keepers’ accommodation, a two-floor building designed according to a 16 square meters plant.

– Features of interest: A 1901 postcard by the photographer Giuseppe Catino, as well as the official draft recently found by Architect Rossi (University of Bari), shows that the early structure beneath the tower was just one floor; the need to increase the number of signals in the bay of Taranto forced the Navy to recruit other personnel and so another level of accommodation was built.

– Historic importance: The site of cape San Vito is strategic and functional so that there has always been a watchtower since manuscripts were available; the older tower located close to the lighthouse was part of a 15th century chain of watchtowers along the coast of Salento. The Reign of Italy had the need to strengthen the signalling capabilities by building new structures in the south of Italy reason why the current Lighthouse was built. Moreover, the Capo San Vito Lighthouse is located in the city which has been hosting since 1883 the most important Italian Navy naval base.

– Associations: guided tours are offered to Public entities or private associations roughly once a week, and the keepers give visitors explanation both of the technical characteristics and historical relevance, supported by an interesting historical room containing old and recent equipment testifying the roots and development of the Lighthouse Service.

– Impact on culture: The lighthouse is a sacred monument for the neighbourhood, a symbol for the city and its history. It has witnessed the birth and growth of Italy as a unified Country. It is a guide for seamen, fishermen, sailors who navigate the Ionian Sea. It enlightens their expectations, beliefs and dreams.

– Impact on world lighthouses: San Vito lighthouse is a magnificent structure that defines both architectural standards and historical key-points in the Mediterranean. This is a contemporary fact other than historical and the relevance of this navigation aid goes from small private yachts to major naval trading.

– Taranto is located in the middle of the Mediterranean Sea and its strategical importance is self-evident if we consider that it is between the Suez Canal and the Gibraltar Strait. The former Reign of Naples and the Reign of Italy comprehended the real importance of a powerful lighthouse which should be both functional as a navigation aid and relevant as a powerful structure, symbol of a solid country.

Preservation state is excellent. Coordination efforts are underway between the Italian Navy and the MIMS (Ministry of infrastructures
and Sustainable Mobility) in order to keep the state of preservation as well as the function of the signal.

The lighthouse is controlled and managed by the Italian Navy Lighthouses Zone Command, based in Taranto, which also takes care of all the lighthouses in the southern Adriatic sea, Ionian sea and Southern Tyrrhenian. Efforts are made to urge local associations to promote and spread the culture of navigation and signaling as well as to launch educational campaigns for schools and institutions.
From the top of the “Capo San Vito” Lighthouse, it is possible to admire the Gulf of Taranto, which goes from the mountains of Calabria to the Salento coast giving the observer a breathtaking view over land, sea and islands.