IALA Heritage Lighthouse of the Year 2022 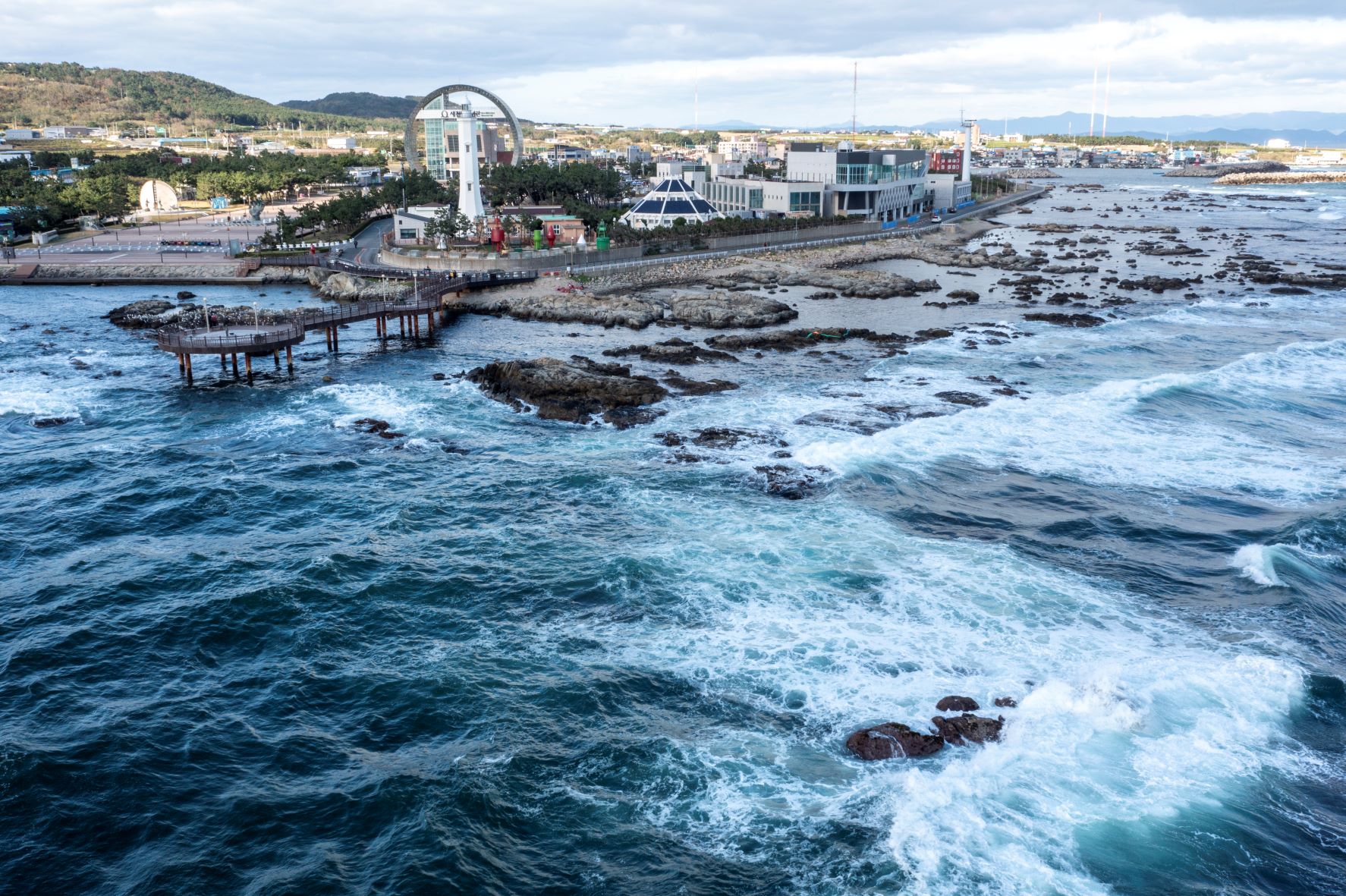 Homigot Lighthouse is located in Homigot, Pohang-si, Gyeongsangbuk-do, South Korea. Homigot (Tiger Tail Cape) is known to the international society as Cape Clonard, named by La Perouse during his exploratory voyage in 1785, which was recorded in Atlas du Voyage de Perouse, an official atlas of his voyages, published by the French government in 1797. The cape was named “Homigot,” or “Tiger Tail Cape,” for the cape’s location at the “tail” end of the tiger (visualizing the Korean Peninsula is), with its front legs extending upwards. Historically, it has been a beacon mound dating back to the seventh century, serving the identical function of a lighthouse to send out signals as a means of information transmission. Located at the easternmost tip of the Asian Continent, it was also famed as a perfect place to see the sunrise at an earlier time than anywhere else on the Korean Peninsula.

2. The Architectural Features of Homigot Lighthouse

When European powers spread into Asia, they built lighthouses in strategic places in Malaysia, the Philippines, and China. Therefore, most modern lighthouses in Asia were built in Western styles or designs. Homigot Lighthouse was born following deliberate planning by the British architect John R. Harding at the official invitation of the Korean Empire in 1903. At that time, most buildings were constructed with the Korean traditional method of joining wood. However, Homigot Lighthouse was built with bricks as its main structure and finished with concrete and limestone on the exterior. it, at a height of 26.4 meters, was the tallest of all lighthouses built up until Korea’s liberation in 1945. From a figurative perspective, Homigot Lighthouse boasts high-level perfection with its elegantly soaring curves from bottom to top, along with the neoclassical entrance and windows.

Homigot Lighthouse’s first lantern was employed a fourth-order incandescent oil vapor lamp produced by Chance Brothers & Co., a British manufacturer. The lantern was designed to send out two flashes of a white beam of light for 10 seconds each, followed by a pause for 20 seconds, every 30 seconds. The light reached over 16NM, or about 30Km. In 1959, an aeronautical lantern was installed with consideration for cost and durability. At present, it is furnished with a 750-mm large-sized rotating lantern, installed in December 2002, that sends out a white beam of light every 12 seconds. The light reaches over 26 miles, or about 42 kilometers. In contrast to other lanterns that are being replaced with upgraded products and technological advancements, the original light tower of Homigot Lighthouse remains almost intact. As for audible aids, an air siren is used. It gives every 1 minute off a sound for 4 seconds, followed by a 56-second pause. The sound is audible across 5NM or about 8Km. The radio aids was installed in 1965, and is now equipped with the Differential Global Navigation Satellite System, which was installed in 2000, along with AIS AtoN, providing the status of AtoN facilities, meteorological information, visual aids, and hazard warnings to vessels. As the country’s tallest lighthouse when it was built in 1908, at the end of the Korean Empire period, Homigot Lighthouse is intact with its original appearance and duty by today as an aid to navigation.

Further details are available via the following weblink;

Homigot Lighthouse is a valuable historic asset that testifies to the developmental history of lighthouses as they crossed Europe to enter Korea (at the very tip of East Asia) to such high-level perfection. The artistic sensitivity drawn by neoclassical aesthetics built on the curved light tower’s appearance of being pulled upwards can be safely acknowledged as exquisite in lighthouse architecture. The light tower’s value in structural engineering is also noteworthy in that it defies its 100 years of existence, remaining intact in its original solid structure, and without a single crack on the walls. The magnificence exuding from this soaring tower standing out from the surrounding fields and looking out over the sea is truly exceptional. Homigot Lighthouse’s historical and cultural heritage draws on three aspects: the authenticity of value in its structure and excellent preserved condition, aesthetic value, and rarity.

Built of brick in 1908, Homigot Lighthouse stands 26.4 meters height and was carefully designed with consideration for structural stability. With a width-to-height ratio of 1:6, it is built in the form of a widening circle from top to bottom to secure increased resistance against seismic loads. It is evident that deliberate consideration was taken for stability against horizontal loads, even in the stage of designing the space between levels. The part between the second and first levels, where a second wall was built in a widening circle, works to disperse the load by applying the compressive stress structure system. The design of the widening lower level is considered to have carefully applied the most advanced technology to properly resist against horizontal loads. In fact, when a 5.4-magnitude earthquake occurred in Pohang in 2017, no damage was found at Homigot Lighthouse. It is still in good operation, retaining a well-conserved condition and demonstrating excellent authenticity.

Homigot Lighthouse is not only excellent in height and solidity but also distinguished in aesthetic beauty. The octagonal brick tower, widening downwards in a beautiful curve, presents a general look of elegance. The entrance and the exquisite pediment roof over the windows create a charming effect that helps reinforce it’s adopted neoclassical style. The upper part of the entrance displays the neoclassical architecture with a touch of Doric order, as was common at the time of its construction. On the other hand, the ceilings of each level inside the lighthouse are decorated with Korean plum flower emblems. This was in accordance with the operating regulations set by the Lighthouse Bureau under the Customs Office of the Korean Empire. The symbol of the plum flower represents Korea’s national autonomy. Use of such emblems in decorating Homigot Lighthouse is identical to those of Seokjojeon in Deoksugung Palace, which is representative of modern Korean architecture in the late Korean Empire. In harmony with the Korean Empire’s royal symbol, the Korean plum flower emblem, and the modern neoclassical aesthetic, Homigot Lighthouse is distinguished for its unparalleled artistry that surpasses any other building from the early 1900s. The architecture of lighthouses became fixed with the forms and structures of the West, which came to completion in the formative, technical, and aesthetic elements of Homigot Lighthouse for Northeast Asia in the early 20th century.

From the date, first light (in 1908) to today, Homigot Lighthouse has preserved the original state of its light tower. Furthermore, its operation has been conducted in the original method as a human-operated lighthouse. In recognition of its value as a historical treasure, Homigot Lighthouse was designated as Gyeongsangbuk-do Heritage Monument No.39 on August 4, 1982. In commemoration of the 100th anniversary of Korea’s first lighting of a modern lighthouse, the Ministry of Oceans and Fisheries organized the Lighthouse Cultural Heritage Committee in 2003. The purpose was to preserve and utilize Aids to Navigation (AtoN) containing worthy historical value.

After a process of preliminary investigation, Homigot Lighthouse and 23 other lighthouses in Korea were designated as “Lighthouse Heritages” from December 18, 2006. Drawing momentum from the Incheon Declaration adopted at the 19th IALA Conference in 2018, the South Korean government launched the Comprehensive Investigation and Research Project on Lighthouse Cultural Heritage, starting in 2019. In this research on Homigot Lighthouse, which started in 2021, an investigation was conducted to check the stability of the structure by applying wind and seismic loads as specified by the contemporary standards on the construction of architectural structures. The results confirmed the structure’s full stability in terms of the contemporary standards. The research team conducted precise measuring through 3D scanning on Homigot Lighthouse, creating its elevations, cross-sectional drawings, and floor plans for future preservation or repairs, along with documenting photographic records from diverse points in time.

Homigot Lighthouse is one of the most-loved tourist sites in South Korea, inviting millions of tourists on an annual basis. Surrounded with beautiful natural scenery, and coupled with convenient tourist facilities, the lighthouse site is ceaselessly attracting visitors. While Homigot Lighthouse is in operation as a navigation aid, and protected from public interference, the precincts around the lighthouse are open for the public to enjoy the compound and tour the site. As part of the Lighthouse Stamp Tour program run by the Ministry of Oceans and Fisheries and the National Lighthouse Museum, Homigot Lighthouse provides opportunities to obtain stamps while visiting the site.

Homigot Cape, where the lighthouse is located, is famed as a venue to watch the sunrise, recorded as one of the 10 best scenic sites during the Joseon Dynasty. In celebration of a new millennium, Pohang-si’s government created Homigot Sunrise Square in Homigot, marking the spot where the sun rises at the earliest time on the Korean Peninsula. In the square, the city hosted the “Hanminjok (Koreans-North and South Korea) Sunrise Festival” and installed the two-part bronze sculpture, “Sangsaeng’s Hand (The Hand of Coexistence and Peace),” symbolizing the spirit of reconciliation and coexistence. With one section installed on land and the other in the sea, this two-part sculpture has become a symbol for Pohang and Homigot.

Spurred by the successful hosting of the Hanminjok Sunrise Festival, Pohang-si followed up with a subsequent project to build a very impressive ring-shaped structure in 2009, called “New Millennium Memorial Hall.” Centering on the facilities established all around Homigot, various artistic festivals are held annually at Homigot Sunrise Square, such as a writing contest and art contest. The National Lighthouse Museum also hosts a “Culture Day” event at Homigot Sunrise Square, along with cultural programs like an overnight “Lighthouse Camping,” “Invitations of Multi-cultural Families,” and education programs linked with AtoN and oceanic culture.

According to the 60-year cycle calendar system used in East Asia, 2022 is the Year of the Tiger (or Year of Im-in). Visualizing the Korean Peninsula as a tiger, the location of Homigot Lighthouse at its “tail” is especially significant in 2022. Homigot Lighthouse was Korea’s first lighthouse designated as a cultural heritage site, which motivated the establishment of a lighthouse museum. As the facilities used for AtoN and related artifacts were fading from memory, it was necessary to preserve the history of lighthouses for their great contributions to oceanic traffic safety and industrial development.

In 1985, Janggigap Lighthouse Museum was built to store the relics of AtoN, publicize the importance of AtoN, and nurture love for oceans. In 2002, the museum was renamed to the present National Lighthouse Museum. Its exhibition halls offer the history and related techniques of lighthouses in Korea and other countries, along with records on the lighthouse keepers. The museum serves to inform the public of the historic and social values of lighthouses in the history of human civilization.