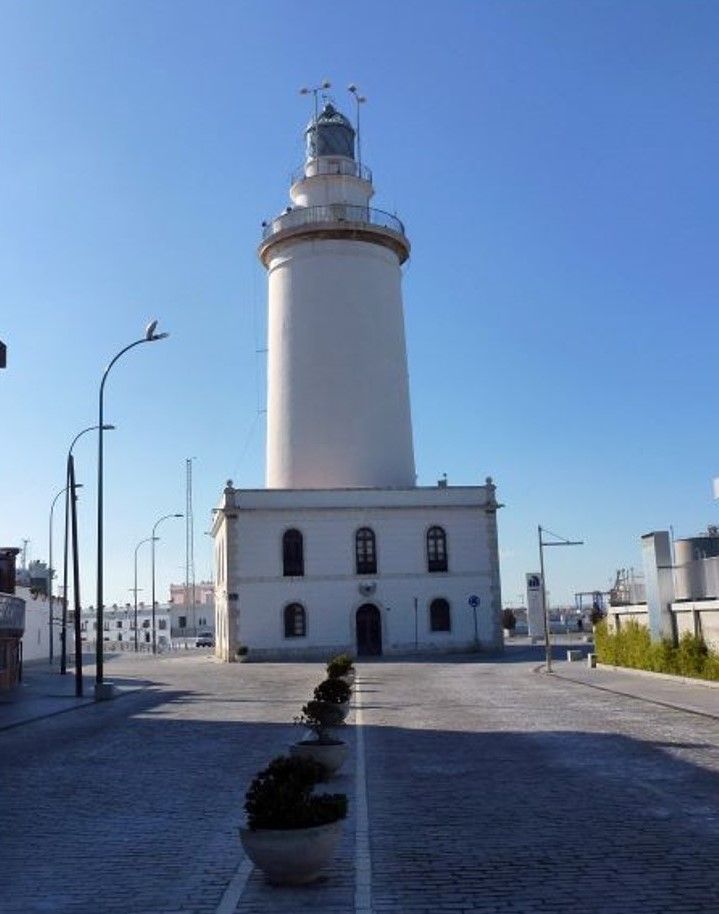 The lack of a light to guide the ships at night was a continuous request in the reports sent to the responsible administration by the local authorities since Malaga had a port.

In the 16th century, the dim light in a small chapel dedicated to the Virgin in Puerta del Mar barely fulfilled this important mission. The small size of the facility meant that once the port works were restarted in 1717, the engineers planned a stonework beacon at the end of the eastern wharf, which was half-built. The first of them, a work by Bartolomé Thurus, was approved by Philip V on that date. Starting in 1722, the project was modified by the general engineer Jorge Próspero de Verboom, who increased the span of the beacon: he designed a stonework tower with a quadrangular base, with six bodies above it, the last one of which contained the lantern with the oil lamps.

However, as the completion of the works on the old wharf was taking too long, it was necessary to erect a provisional crane, made of wood and of limited scope. It contained a lantern that, being risen with the corresponding pulleys, was turned on and off at the call to prayer. The range of the light was evidently poor. At the beginning of the 19th century, the end of the old or eastern wharf was finally sufficiently settled, making it possible to consider building a definitive stone lighthouse. After the War of Independence, the works of the current “lantern” were able to begin in December 1813. In a plan by engineer Pery dated January 1814, it can be read: “the New Tower that is being built, 150 feet high above sea level, to locate a rotating beacon on it”.

For its construction, Pery had the collaboration of the Ecclesiastical Council and the Consulate of Malaga, from which he requested the corresponding financial support in December 1813. The works amounted to 387,301billon reals, such a reasonable amount thanks to the fact that the engineer had several brigades of convicts “of those with the cleanest sentences”, that is, those convicted who were not imprisoned for blood crimes.

The twenty-one silver stoves were entrusted to Manuel Marín and Joaquín Santillana, who acted as guarantor for the aforementioned, which were delivered within five months. For the machine, Pery was able to cast some unusable bronze cannons that the military authorities provided free of charge.

Finally, on May 30, 1817, the feast day of Ferdinand VII, the “lantern” of the Port of Malaga was inaugurated. However, the feminine name of La Farola, which would not take long to arrive, does not yet appear in the archival documentation.

Since 1817 La Farola has undergone some transformations forced by technical advances and the needs of the building itself, the lighthouse keepers and their families. In 1853, the civil engineer Ángel Mayo drafted a project to build a house in its base for an amount that reached 78,092 reals. Two years later, a new proposal was drawn up by Francisco Milla, also an engineer, in order to receive a lighting device with a greater reach, thus fulfilling the prescriptions of the General Maritime Lighting Plan, which we will refer to later. This project was approved by royal order on April 21, 1856, proceeding to the inauguration on March 1, 1858: the old reflector equipment was replaced by a retroreflecting one of fixed light, varied natural color with red flashes of an approximate range of 15 miles. After the 1884 earthquake, it began to emit white light again. On the base of the slightly frustoconical tower, which is just over 27 meters high, a 4-meter tower and some other elements added later stand.

The ground-floor house was extended to a new floor from 1909 in some works that lasted six years. Shut down during the civil war (1936-39) to avoid helping the artillery targeting, once the war was over the building was rehabilitated. Some important technical innovations were made afterwards. Very recently, the Royal Academy of History and the Royal Academy of Fine Arts of San Fernando have issued corresponding reports affirming the merit of La Farola de Málaga building for its extraordinary historical, constructive, artistic, landscape and holistic values.

In short, La Farola de Málaga occupies a prominent place among the Spanish lighthouses not only for its longevity (1817) and for being
designed by one of the most famous “hydraulic” engineers, Brigadier Pery y Guzmán, but rather it historically belongs to the short number of stove lighthouses existing in Spain in 1847, when the first “General Plan for maritime lighting of the coasts and ports of Spain and adjacent islands” was published. The Plan was proposed by the lighthouse commission and approved by Royal Decree on September 13, 1847. At that time there were only seven lighthouses with rotating installations, that is, the ports of Santander, La
Coruña, Vigo, Cádiz, Tarifa, Málaga and Portopi, in Mallorca.

La Farola de Málaga, in addition to being exceptional for the aforementioned reasons, is the only lighthouse in Spain, together with one in Tenerife, with a feminine name, which makes it almost unique. Another important fact to take into account is that the Ministry of Culture and Sports from the Central Government is currently considering its declaration as BIC (Bien de Interés Cultural: Cultural Interest Asset).

The General Directorate of Fine Arts, aware of the importance of La Farola, has initiated actions to carry out its legal protection, increase knowledge of the asset and take the appropriate measures to maintain its conservation. In accordance with the provisions of article 9 of Law 16/1985, of June 25, on the Spanish Historical Heritage, the Ministry of Culture and Sports has obtained reports from the Royal Academy of History and the Royal Academy of Fine Arts of San Fernando to start the process for “La Farola” to become a BIC.

The report from the Royal Academy of History indicates that the emblematic character of its function and architecture in the urban setting of Malaga, for at least 200 years, clearly justifies its recognition as a Cultural Interest Asset. The report from the Royal Academy of Fine Arts of San Fernando highlights the high value of the monument within the history of Spanish lighthouses, not only because of its longevity and because it was designed by Brigadier Pery y Guzmán, but also because it historically belonged to the short number of existing stove lighthouses with revolving light in Spain in 1847. It concludes that it’s considered appropriate to start the process to declare the lighthouse a Cultural Interest Asset.

In 1913, optics were significantly refurbished. In these works, engineer Mauro Serret participated in the calculations and the Julius Pintsch AG house, formerly Bauklempnerei, founded by Carl Friedrich Julius Pintsch (1815-1884) from Germany in the machinery, providing the characteristic of 3 + 1 flashes, which is preserved today.

In May 1916, a modern turning equipment, installed on a mercury-bathed float base manufactured in Madrid by the Spanish Society of Metal Constructions, came into operation. A year later the lighthouse was electrified. During the Civil War and by an order dated August 28, 1936, La Farola was turned off to prevent its light from serving as a reference to the artillery of the rebel side. The Central Committee of the Republican Fleet ordered that it be painted earthen, with dark and light patches to camouflage it, despite which it suffered some damage, especially since an anti-aircraft battery had been located at its base.

In 1954 the aeromaritime lantern was installed and in 1975 the radio beacon that had existed since 1957 was replaced. Improvements are currently being made to its lighting system, respecting the classic Fresnel-type optics.

Public access is limited due to the existence of navigation support machinery inside. In any case, the Port Authority, on whom its maintenance and functionality depends, always facilitates access when it is reasonably requested.

In 2017 and 2018, the Port Authority organized a series of cultural events to commemorate the 2nd Centenary of its construction: an Exhibition on Historical Cartography of the Port of Malaga, the edition of the album Monumenta Cartográphica Malacitana (two editions) and the comic Port and City. Bicentennial of La Farola. All these works were spread through the libraries and educational centers of the city and the most important national archives: General Archive of Simancas, National Historical Archive, Archive of the Naval Museum, General Archive of the Navy, General Military Archive of Madrid, General Military Archive of Segovia, Geographical Center of the Army,…).

A cycle of conferences on La Farola celebrated at the Instituto de Estudios Portuarios in the port premises completed the annual program of commemorative events.