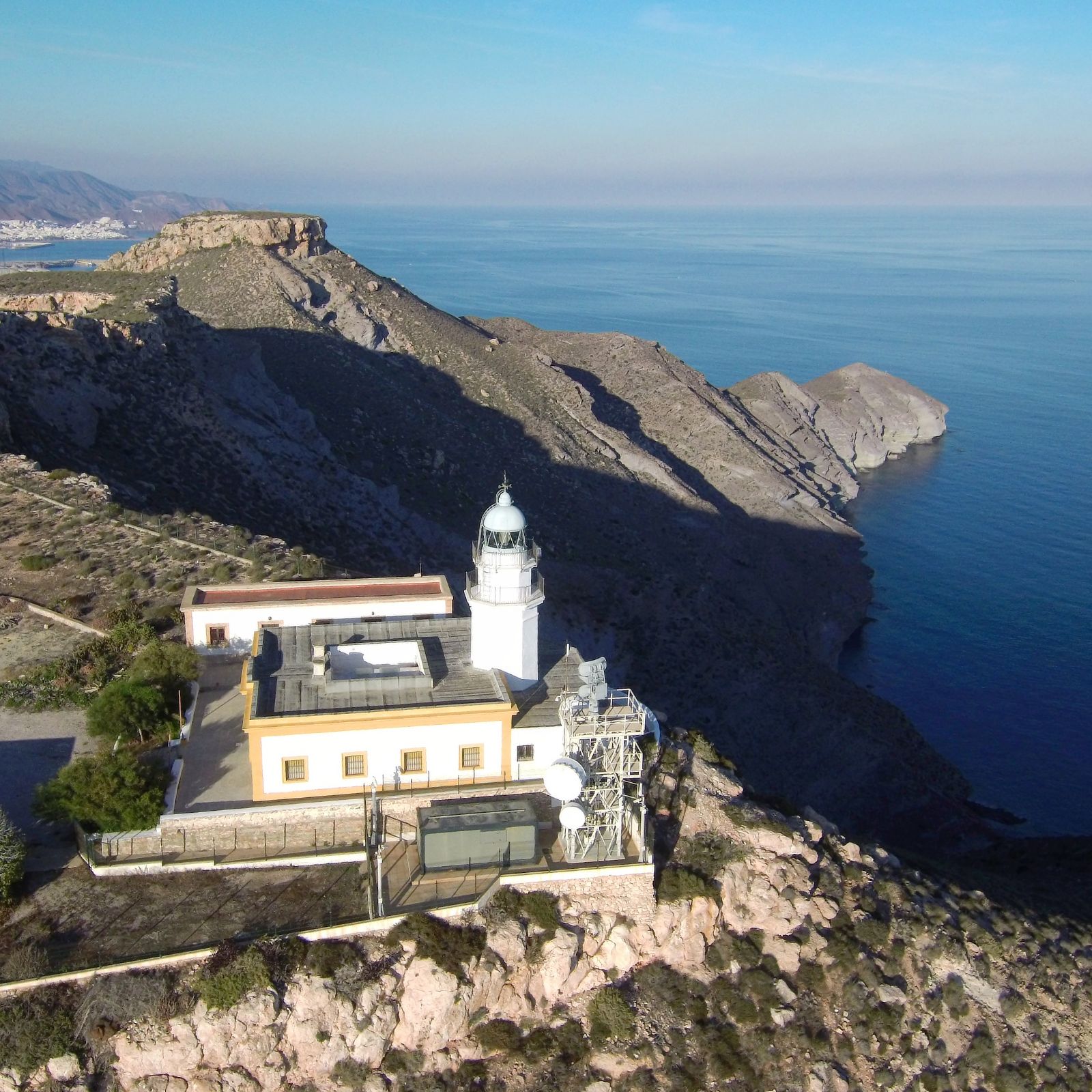 Mesa Roldán Lighthouse was built in 1863 over a secluded rocky plateau, in Cabo de Gata-Níjar Natural Park. Whith 222 meters of focal height is the tallest lighthouse whith households in the Iberian Península and of course in the Mediterranean sea.
The building is rectangular, white, with corners and windows jambs painted in ochre, with a white octagonal tower of 11 meters.

This lighthouse is not a monumental building nor is it one of the oldest or more historic. Its value lies in high location it occupies. It is a magnificent viewpoint of the sea and the coastal area of the Cabo de Gata-Níjar Natural Park.

Another of its values is that its lighthouse keeper (Mario Sanz Cruz ) has been in the lighthouse for 30 years and with the approval of Port Authority of Almería has been setting up a museum with lighthouse pieces that has been able to rescue: photos and memories of old lighthouse keepers and above of with art, crafts, and collecting on lighthouses.

This museum that does not have any type institutional financial aid, it has been achieved thanks to the donations from the families of the old lighthouse keepers, more tan 100 artists and artisans, collaborating friends and visitors who send their collaborations.

Mesa Roldan lighthouse receives numerous visits from schools, universities, cultural associations as well as visit from families and tourist who visit the area. Always by appointment and guided by the lighthouse keeper.

But this lighthouse is more than a museum and very often acts as a cultural centre: with book services, poetry readings, musical performances, exhibitions, photography workshops, environmental activities… etc. More than 150 television programs, documentaries, filming of shorts, movies and advertisements have passed through this lighthouse.

Its lighthouse keeper is a writer and has published several books about lighthouses, some with the history of this lighthouse other about lighthouses around the world, and fiction stories with a lighthouse theme. It is a simple and humble lighthouse, the centre of many things, that directs its flashes to the sea an to the land, involving everyone to value, conserving and developing culture under the light of the lighthouse.

The conservation state is good. All windows and exterior doors have been recently replaced. The original building and the tower from 1863 remain. Lantern an optic were changed in 1986.

During the month of July each year, the radio station Onda Cero Almería , makes it morning program every week from one of the lighthouses of Almería and Mario Sanz is in charge of talking about history, shipwrecks and life at the sea. On the same station the lighthouse keeper has a weekly section on the same topic.

The lighthouse keeper attends to all media that request it: radio, Television and social networks. All this movement of people and media around the Mesa Roldan lighthouse is causing an increase in request for visits to other lighthouses in Almería an nearby provinces.

The lighthouse arouses interest in the world of lighthouses in general which are increasingly valued by people outside of navigation.