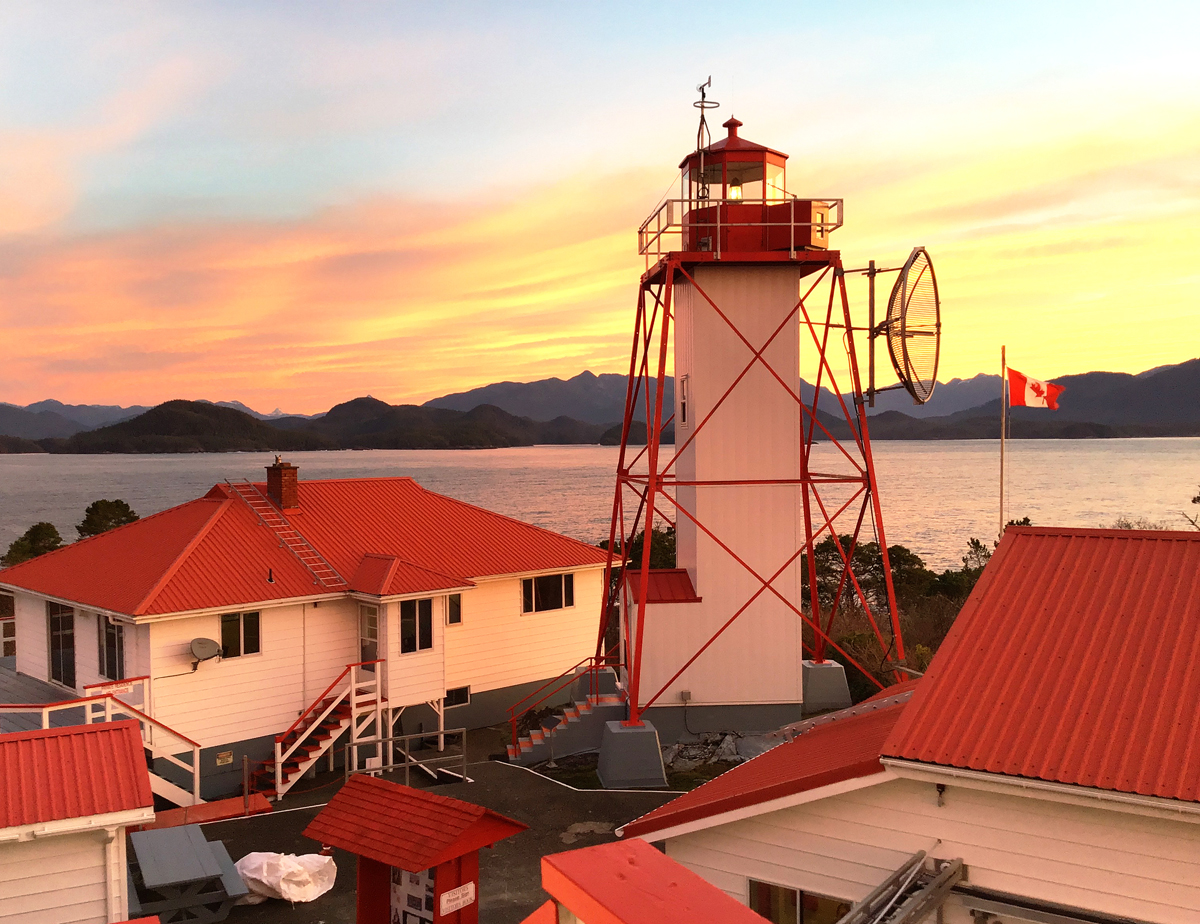 There are six related buildings on the site that contribute to the heritage character of the lighthouse: (1) the principal keeper’s dwelling, (2) the assistant keeper’s dwelling, (3) the engine/fog alarm building, (4) the boathouse, (5) the winch house, and (6) the store shed.

The Nootka Lighthouse is a heritage lighthouse because of its historical, architectural, and community values.

Historical values
The Nootka heritage lighthouse is located in an area occupied for over 4,300 years by First Nations peoples from the Nootka Sound region. In the 18th century, Nootka Sound became an important site of early contact between First Nations of the Pacific Northwest and European explorers, and developed into a centre of trade (notably furs) and diplomacy. In the early 20th century, the Department of Marine and Fisheries yielded to local demands and built a lighthouse on San Rafael Island as part of a more general expansion of the lighthouse system in British Columbia. The first Nootka lighthouse was a square, wooden dwelling surmounted by a lantern, and it was put into service in 1911. The current tower replaced the original lighthouse in 1958.

At the time of its construction in 1911, the first Nootka lighthouse played a vital role in safeguarding water routes for the many regional industries that were dependent on marine shipping, including canneries, logging, and mining. The pulp and paper and mining industries would continue to grow throughout the 20th century. The current lighthouse primarily serves international vessels exporting lumber, as well as recreational boaters, many of whom are involved in developing tourism and outdoor recreational initiatives to supplement the region’s primary industries

Although the Nootka heritage lighthouse was designed and built primarily with functional considerations in mind, it possesses very good visual appeal owing to its traditional red and white colour scheme, pleasing proportions, allusion to traditional square-tapered lighthouses, and especially its prominent position within a picturesque historic lightstation with the rugged rainforest of the Pacific Northwest as a backdrop.

Notable features that speak to the functionality of the Nootka heritage lighthouse include its asbestos board exterior cladding (which was a popular building material at the time because it is fire retardant, lightweight and strong), the aluminum lantern (which is easier to maintain than other commonly-used materials), and the enclosed metal staircase (which improved lightkeeper safety when compared to other open skeleton towers built as lighthouses in the 20th century).

The Nootka heritage lighthouse is located on the summit of San Rafael Island and it dominates the setting in this rugged and isolated landscape of the Pacific Northwest. The site has undergone only minor changes since its modernization in the 1950s and 1960s, when the keepers’ dwellings, engine room/fog alarm building and boathouse were added. The lightstation is also home to extensive archaeological remains related primarily to Mowachaht-Muchalaht First Nations history.
Given its prominent location at the mouth of the Nootka Sound, the lighthouse is well-known to local and international mariners. Today, while the lighthouse still guides vessels exporting goods such as lumber, Nootka Sound is increasingly popular with eco-tourists and recreational fishers. The lighthouse not only guides vessels bringing tourists to the region, it is also considered to be a component of Nootka Sound’s built heritage.

Nookta lighthouse is still an active Aid to Navigation and fully manned and operational. Regular efforts are made to maintain the structure and land and preserve its heritage value.

The following character-defining elements of the Nootka heritage lighthouse should be respected:
— its intact, as-built structural form, height, profile, and proportions;
— its square, non-tapered four-level galvanized-steel tower, covered in protective boarding, accessed via the gable-roofed entrance vestibule projecting from the base;
— its square, tapered metal framework surrounding the square tower, fabricated of sectional components;
— its square lantern gallery that supports the lantern;
— its aluminum octagonal lantern, including its designed form and proportions;
— its gallery railing, including its designed form and proportions;
— its traditional red and white exterior colour scheme;
— its visual prominence in relationship to the water and landscape.

The following character-defining elements of the related buildings should be respected:
— their respective built forms, profiles, and proportions;
— their traditional red and white exterior colour schemes;
— their contextual relationships to the lighthouse within an historic lightstation setting.

The Canadian Coast Guard along with Parks Canada seek whenever possible to create awareness of the heritage, cultural and architectural value of this sites by using virtual media campaigns. Notably WATON day.

Other matters of note

Given the difficult history Canada has had with its indigenous peoples, it is important to preserve and recognize the historical sites such as these. Today more than ever there is recognition for solidarity, reconciliation and inclusiveness. The lightstation is home to extensive archaeological remains related primarily to Mowachaht-Muchalaht First Nations history. Keeping this history alive and protected and allowing the stories to be told as they should.