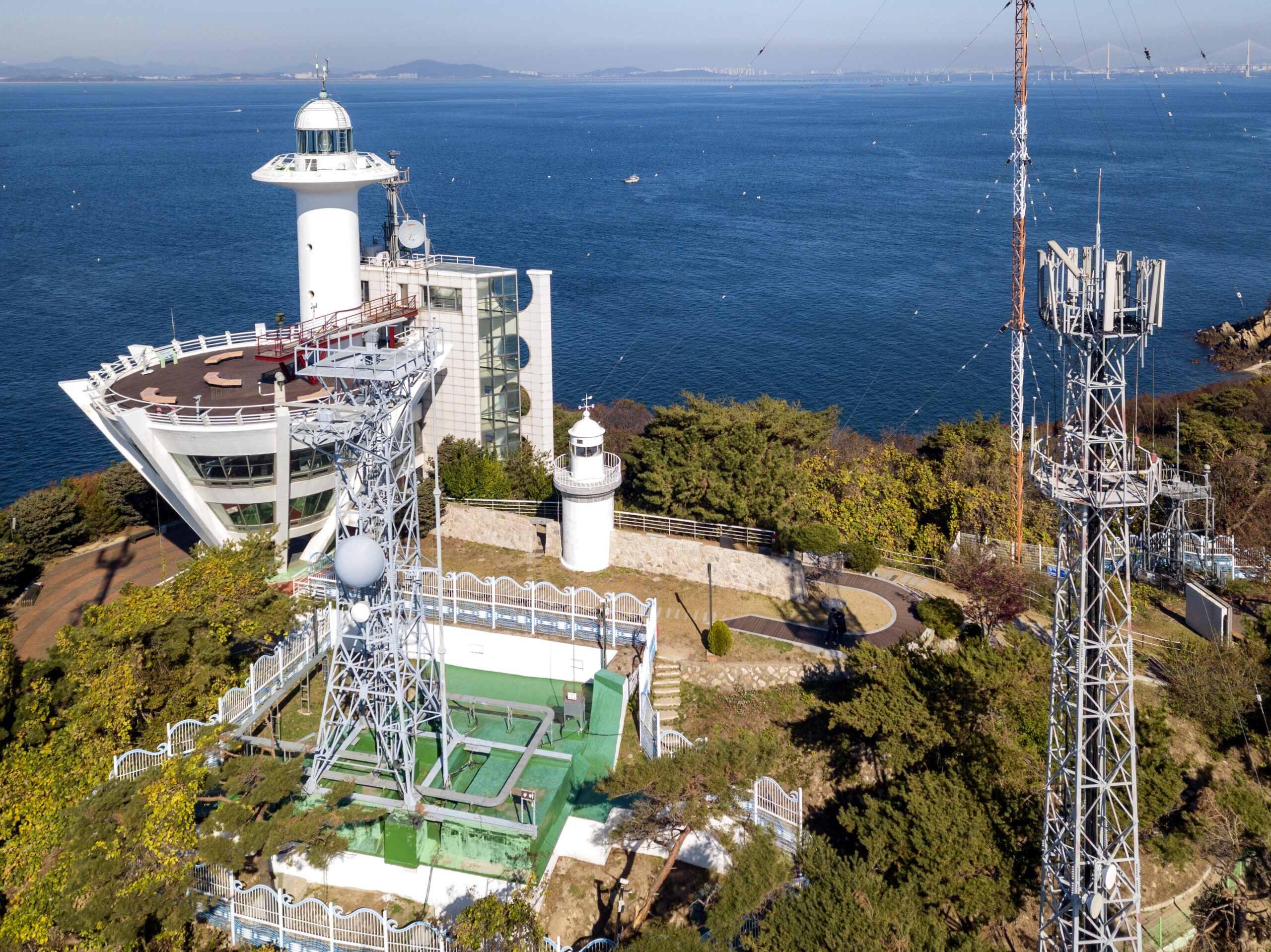 Palmido is an Island located 13.5km southwest of Incheon Port, the major port on Korea’s west coastline. Palmido is a strategically important place for the national defense and a hub of maritime logistics. It is situated at the entrance to the closest port to the capital city, Seoul. Thus modern lighthouse was priorly built in Palmido and nearby Incheon Port. Palmido Lighthouse was created in June 1903 and is the oldest modern lighthouse that exists in Korea.

When Palmido Lighthouse was first lit, the lighthouse tower was 7.9m in height and 2m in diameter and was made up of a round white concrete structure with partially stone. It was located at the top of the island, 73m above sea level. Stone walls of 7.6m in length and 1.2m in height were stacked on both sides of the lighthouse tower and painted with quicklime to make the lighthouse visible during the daytime. The lantern was rotary electric manufactured by Barbier, France, in 1902 and used 6-grade Fresnel lens. The light source was a petroleum lamp. At that time, Palmido Lighthouse’s character of light was three white flashes with a 40-second cycle, which emits three flashes for 16 seconds with a 24-second interval, and the nominal range was 20 nautical miles.

However, as ships became larger and faster, the low-profile lighthouse tower was raised as a question. And the operation efficiency decreased because of the deterioration of the facilities. Accordingly, a new lighthouse was built in 2003 nearby the old one to improve the function and efficiency in operation. Moreover, it was designed to achieve harmony in nature with formative aesthetics familiar to citizens.

The new lighthouse’s facilities provide opportunities for citizens to enjoy the historically meaningful place with a 26m high lighthouse tower, observation deck, a history museum, and a 100-year celebration symbol. The lantern includes Fresnel lens with a focal length of 750mm, developed with pure domestic technology, and its character of light is a white flash that fires once every 10 seconds. It has a nominal range of 27 nautical miles, and the lighthouse tower is constructed of white circular concrete.

Palmido has been loved by Incheon citizens for its amazing views of the sunset. In 2017, it was selected as The Nine Most Beautiful Places in Incheon, where people voted for hidden attractions in Incheon. Palmido Lighthouse has been a part of the landscape of Palmido for more than a century, and some value is inherent in its history.

The Japanese Empire, which had planned to invade the Korean Peninsula from the late 1800s, recognized the geographical importance of Palmido on the road to Incheon and urged the Korean Empire to construct lighthouses in 1901. In 1895, Japanese civil engineer Ayahiko Ishibashi surveyed the Korean coast and proposed tobuild lighthouses. John McLeavy Brown, the inspector general of customs of Korean Empire, decided to make 32 of them first because of financial issues. Palmido Lighthouse was built entirely in 1903, and the construction contractor was known as Ayahiko Ishibashi. But it seems that John Reginald Harding, a consulting engineer of the Korean Empire, led the completion of the lighthouse construction after the fact that Ayahiko Ishibashi fell ill and returned to Japan in December 1902 was disclosed. Researchers on the Korean lighthouse history interpreted that Korea had the will to open the port independently because lighthouses’ construction funds were part of the tariff income in 1901, although foreigners constructed Palmido Lighthouse. Palmido Lighthouse is a cultural heritage that symbolically represents the several meaning of the modernization of Korea.

Korea began to run the lighthouses after Korea took independence back in 1945.Palmido Lighthouse contributed to the success of Operation Chromite during the Korean War on September 15, 1950. General MacArthur of Allied Forces decided that Operation Chromite was necessary to turn the tables of the Korean War. The United States Navy and a commando of the secret intelligence agency KLO (Korean Liaison Office) occupied the empty Palmido Lighthouse, lit the light, and supported 261 Allied Forces fleets to land on Incheon Portsafely. The Ministry of Patriots and Veterans Affairs designated Palmido Lighthouse as a remembrance facility to commemorate it, and the monument for the Unit KLO 8240 was erected in Palmido.

Palmido Lighthouse is the oldest lighthouse in Korea, representing the modern architectural style of Korean lighthouses. A letter from Edwin Mogan of the U.S. Legation to Elihu Root of the U.S. State Department on November 27, 1905, included a record of John Reginald Harding’s mention of Palmido. He marked Palmido as “Yodolmi Island” and recorded that stone walls were built on the lighthouse tower’s side to raise visibility. The fact that the walls are erected next to the lighthouse tower is one of the distinct features of Palmido Lighthouse, and its original form is preserved. The old Palmido Lighthouse tower’s Fresnel lens, lantern, and ladder are also intact. It is also the oldest concrete structure ever discovered in Korea.

Therefore, in recognition of the historical value of Palmido Lighthouse, various related organizations make efforts to preserve its original form.

Incheon Metropolitan City designated Palmido Lighthouse as Incheon Tangible Cultural Property No. 40 in February 2002, and the Ministry of Oceans and Fisheries set it as Lighthouse Cultural Heritage No. 1 in December 2006. And a restoration project including sampling and analysis was conducted by the Incheon Regional Oceans and Fisheries Office over two years, beginning in 2015. The project encompassed crack repairs/reinforcement, dry/wet cleaning, stabilization for iron materials, painting, and stone pillar repair.

In 2019, the National Lighthouse Museum commissioned a research project to comprehensively investigate Palmido Lighthouse as a cultural heritage from various perspectives such as architecture, ecology, and humanities. Based on the research result, the Ministry of Oceans and Fisheries applied Palmido Lighthouse for status as a National Historic Site to the Cultural Heritage Administration, which was finally approved on September 15,2020.

In 2014, the Ministry of Oceans and Fisheries opened a history hall in Palmido that displays the history of Incheon Port and the historical value of Palmido Lighthouse so that the people can understand it at a glance. From 2015, a Docent Program that explains Palmido Lighthouse with fun is operated. In 2017, a beautiful lighthouse photo contest was held in wish of the successful opening of the 19th IALA Conference. Also, Palmido Lighthouse provides cultural events for various classes of people all year, such as experience classes, music concerts, walk events, and mural painting events.