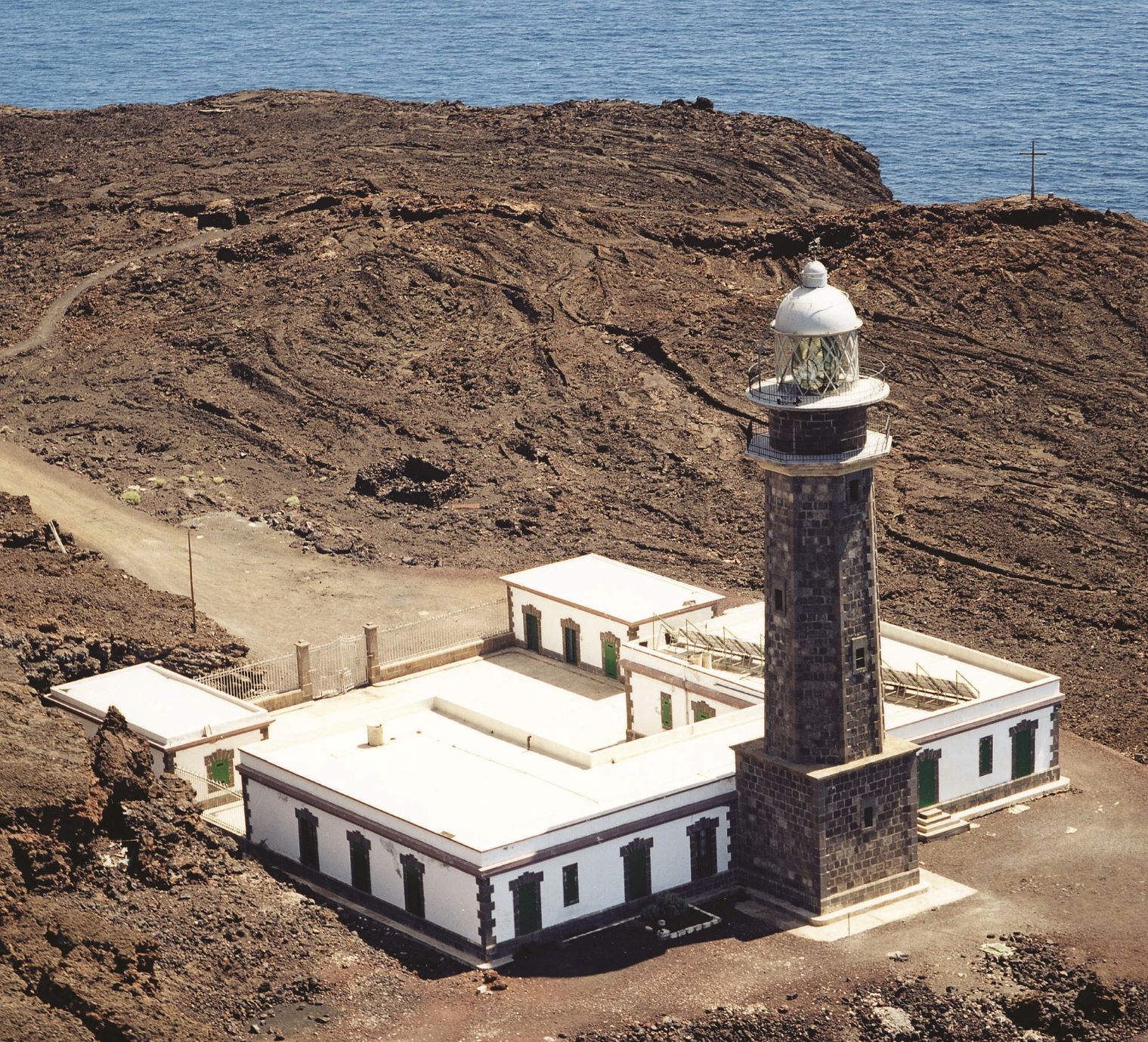 The Punta Orchilla Lighthouse stands 25 metres high and 132 metres above sea level and is located on the western side of El Hierro Island. The structure of the lighthouse was built with volcanic stones brought from Gran Canaria Island. The stones were discharged on a small port close to the lighthouse and transported to the final location using camels. The nominal range is 24 nautical miles.

The second maritime lighting plan for the Canary Islands established the need of a lighthouse in the island. The lighthouse project was approved in 1922 and the technician Antonio Montesdeoca and the engineer Eloy Campiña were in charge of the construction. However, several years before (1889) a viability study for the construction of the lighthouse was carried out through government order.

The lighthouse was lightened for the first time in 1933 and was built following a similar style to others 19th Canarian lighthouses. Over the years, several restorations have been made in order to maintain the lighthouse in good condition. The conservation works are noteworthy due to its isolated location.

In 2008 the Punta Orchilla Lighthouse appeared in a set of six commemorative lighthouses stamps issued by the Spanish postal service
(Correos). A meridian memorial is built close to the lighthouse, as a reminder that historically it was considered to be a prime meridian for early map makers, and was known as the Ferro Meridian, at the “western extremity of the known world”.

1. Before 1492 “Punta de Orchilla” was known as the western extremity of the known world
2. The tower structure was built with volcanic stones
3. Historical location: Claudio Ptolomeo y Marino de Tiro in the book “Geography” claim that the zero meridian was located on the westernmost point of the island (Punta de Orchilla). In addition, also France establish in 1634 the same location for the zero meridian confirmed later on by the expedition carried out by the French Academy of Sciences in 1724.
4. One of the most powerful range (nautical miles) lighthouse under the administration of the port Authority of Santa Cruz de Tenerife
5. The regional television company have made reports and documentaries about the Canary Islands lighthouses including the Punta Orchilla Lighthouse.
6. The University of La Laguna through their journalism webpage has also dedicated a report of the Punta Orchilla Lighthouse.
7. The Canary Islands Government has posted on their webpage education resources with relevant information about the Punta Orchilla Lighthouse.
8. The municipally where the lighthouse is located, named El Pinar, has posted on the municipally webpage the Punta Orchilla lighthouse as a “Touristic point of interest” in addition with historical information.
9. The Punta Orchilla Lighthouse appear on the badge of the municipally named El Pinar.

The Canary Islands are placed in a strategy location for maritime routes connecting South America and Africa with Europe. In this context, Punta Orchilla lighthouse due to it location has taken an active role on navigation safety on these routes.

The Punta Orchilla Lighthouse is the most important civil building on the island of El Hierro, being only eighty-nine years old.

The conservation works are noteworthy due to its isolated location. Reach the lighthouse requires a 25 km trip via road that is only partly metalled, the end of the road being both unmade, and uneven.

In order to educate the public about the heritage of the lighthouse and the important of these structures in the context of aids to navigation several efforts have been made from the Port Authority of Santa Cruz de Tenerife.

Among the efforts done stands out a photography contests with the aim of visibilize these structures or the simultaneous switched on of the lighthouses manage from the Port Authority of Santa Cruz de Tenerife during the World Marine Aids to Navigation day.

Nowadays the annex building is under administrative procedure in order to establish a tourist accommodation. This will allow to open the one and oldest lighthouse of El Hierro island to the public.