Lighthouse Operator: The Northern Lighthouse Board and The Shetland Amenity Trust 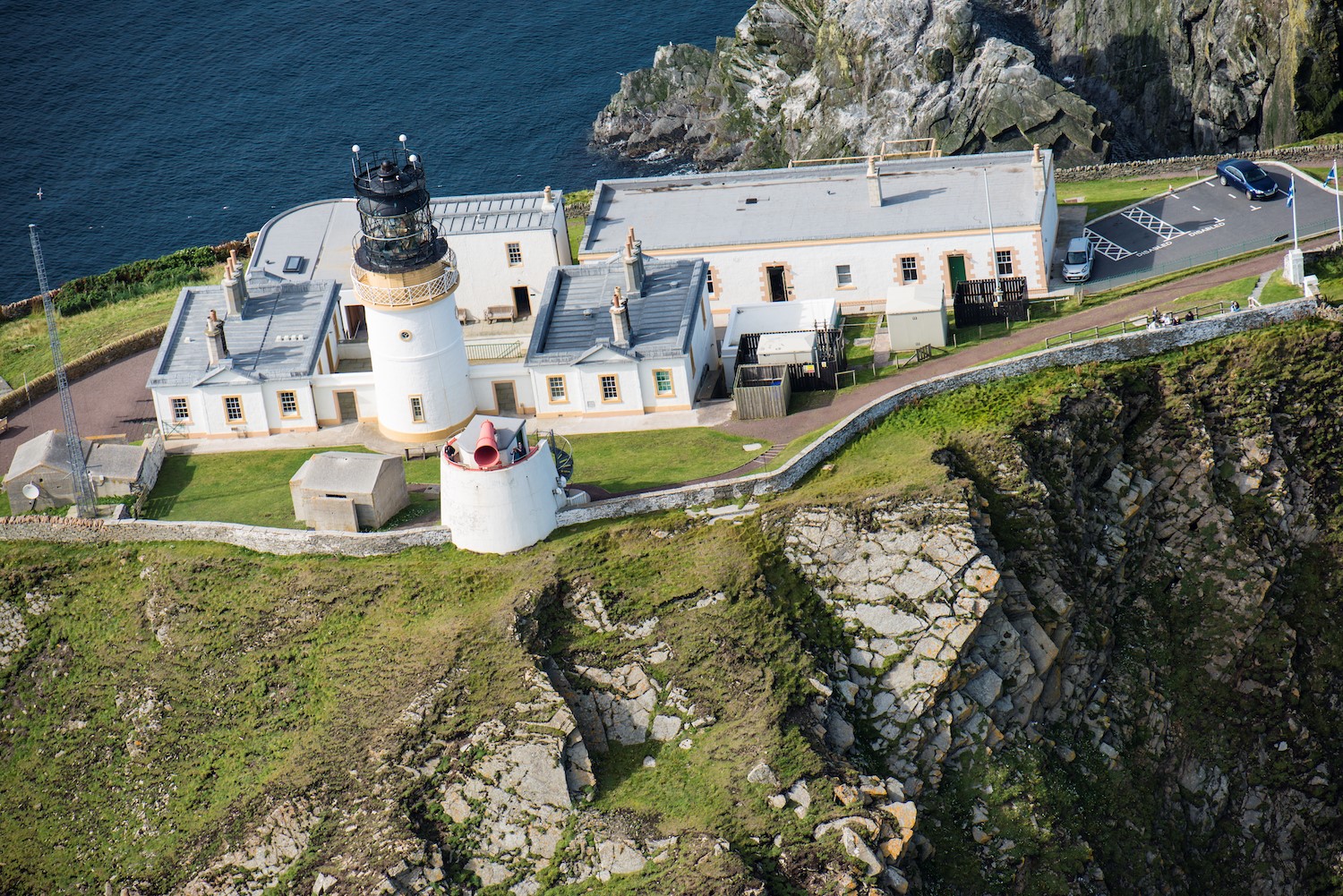 The Shetland Islands are approximately 90 miles north of the UK Mainland and most visitors to the island archipelago are greeted by Sumburgh Head Lighthouse which is situated on the clifftop of the most southerly point of the Islands. The arrival by air was considered, at one time, one of the most difficult places to land (on a par with Hong Kong), as the pilot had to negotiate the lighthouse headland and descend into the airport at the base of the headland whilst battling the legendary Shetland weather. This included horizontal rain and gale force fog! The landing usually gave the passengers on the right-hand side of the aircraft an amazing view of the lighthouse as a consolation to a rather bumpy approach and landing.

The lighthouse is a 17 metre white painted (roughcast) tower with a double thickness wall and cavity measuring four feet thick (approximately 1.2 metres), one of the first cavity walled towers in Scotland. It is situated on a cliff top with the elevation of the light at 91 metres, with a character of group flashing three white every 30 seconds and a nominal range of 23 miles.

The optic is a three tonne first order lens that has 26 reflectors instead of the normal 21. The lens is floating on a 200kg mercury bath and is in perpetual motion to prevent potential fires from the magnification of a stationary lens. The light source has a main and standby lamp arrangement and is currently a 400 watt metal halide lamp. If the main lamp fails the lamp changer operates to rotate the standby lamp into place to ensure the operational lamp is in the focal plane. As spare parts are an increasing issue there will be an upgrade to the light source in the near future.

Key Points of Sumburgh Head History:
• Construction commenced in late 1819 and the Lighthouse was first lit on 15th January 1821. This was delayed from the original date as a ship called the Freemason carrying glass and materials for the lantern sank when entering Grutness Voe Lighthouse pier, all were lost. The original light was a stationary single white light fuelled by oil.
• In 1868 the oil was replaced by paraffin and remained a stationary single white light.
• The foghorn was installed and the Lighthouse was upgraded to a three man station in 1906.
• After complaints from the mariner the light mechanism was upgraded in 1914 to a revolving lens that is still in use today.
• In 1939 Radar a station was set up by the Royal Navy in the Lighthouse grounds.
• The “new” fog signal engines were installed in 1951. The engines were manufactured and supplied to NLB in October 1951, installed and running by 27 Dec 1951.
• Electricity to the station circa. 1953.
• An electric light was installed in 1976 keeping the original flashing character (Fl (3) 30s).
• The foghorn was discontinued in 1987, last official blow was a Monday morning test carried out by the Occasional Keeper Ian Smith.
• The lighthouse was fully automated, and the Keepers left the Lighthouse in 1991, a sad day for all.
• As the site had been used during World War II as a Radar site it was ideally situated for a Radio Direction Finding (RDF) system. This system used Amplidan Radio beacons installed in the 1980’s using a single wire T aerial, latterly the radio beacon system supported a subscriber Differential GPS system called Scorpio (early 1990’s), it was replaced in 1998 by the IALA DGPS/ DGNSS Beacon system as we know it today. This system was upgraded in 2013. In March 2022 the UK will discontinue their DGPS transmissions.
• Headland area designated as an RSPB Nature Reserve in 1994.
• In early 2000’s an Automatic Identification System (AIS) AtoN system was installed to aid the mariner.
• The Shetland Amenity Trust purchased the non-operational buildings in 2003 and offered self-catering accommodation to visitors.
• Refurbishment of the Trust owned buildings commenced in 2012, the visitor centre and the newly built Stevenson Centre was opened in June 2014 by HRH The Princess Royal.
• Restored foghorn and Kelvin engines operational in 2015, restored by Brian Johnson, (as an NLB Mechanical Technician in a former life Brain had the expertise).
• On 15th January 2021 the Lighthouse celebrated its 200th birthday!

The Lighthouse buildings and tower were the first ‘Stevenson’ built light in Shetland and were designed to have double thickness walls throughout to ensure the inherent damp weather of the area was kept at bay. The Lighthouse at Sumburgh Head is a Category A listed building.

The lens fitted in 1914 (and still operational today), was described at that time as an ‘equiangular refractor’ and is noted as having 26 reflectors instead of the normal 21.
Sumburgh Head has a rich and diverse history with archaeology known to date back to the Iron Age as the site of a promontory fort.

During the second World War the Lighthouse grounds were utilised as a Radar site by the Royal Navy, this caused some controversy as Lighthouses were designated as “not legitimate military targets” and it was argued that this broke the Geneva Convention!

The Shetland Amenity Trust took ownership of the non-operational buildings in 2003, leading to an improvement in the state of the buildings and a sympathetic restoration of the buildings and construction of the Stevenson Centre was undertaken from 2012, completed in 2014 – visitors are able to book a stay in the self-catering accommodation offered by the Trust. Old garages were demolished and the new education facility named the Stevenson Centre was built.

The Fog signal and associated engine refurbishment was completed in 2015 and a 10-minute video showing the three Kelvin engines being started up is on this link https://www.sumburghhead.com/engine-room
The former Muckle Roe Lighthouse cast iron tower has been sited at the main car park at the base of the hill approximately one kilometre from Sumburgh Head Lighthouse and is used in the summer months by Visitor Service Assistants who provide information and assistance to visitors. The cast iron structure and forth order lens were originally situated on Muckle Roe Island to the north west of Shetland Mainland and the complete structure was replaced around 2001 with a modern minor light structure.

The condition and continued care of all the buildings has improved with the investment by the Shetland Amenity Trust and is a first-class visitor attraction, welcoming many international visitors as Lerwick, the capital of Shetland, has become a destination for Cruise vessels. The number of Cruise vessels visiting Lerwick has increased year on year, with 2019 having 99 vessel arrivals between March and October. Sadly the 2020 season did not materialise due to the worldwide pandemic but was to be a record-breaking year with 105 vessels scheduled and an estimated 92,000 passengers, a lot of whom would have supported the local economy by visiting Sumburgh Head and the surrounding area.

The Shetland Amenity Trust engage with locals and visitors of all age groups and nationalities giving a practical experience when visiting. They have included information on their website and have activity packs to download. The Visitor Centre includes the life and times of the lighthouse and Keepers along with the intrinsic natural heritage of the area focusing on marine wildlife in the Marine Life Centre and the RSPB Nature Reserve focusing on the various bird colonies on the cliff. The seabird bird colonies on the cliffs at Sumburgh Head are the most accessible in the UK, with the Puffin being very popular with all the visitors.

There are also ‘cliff cams’ that live stream images and sound (usually wind!) from the site, the tilt and pan cameras give a feel of the local conditions (and wildlife) and really bring home the rugged beauty of the area. Link below to the cameras
The majority of the visitor centre is accessible for wheelchair users and there is disabled parking at the Lighthouse so those less able do not have to climb the steep incline to reach the top. The Marine Life Centre focuses on the importance of ‘light’ in all aspects of life – from creating a food source to protecting the mariner in the dangerous waters around the Sumburgh Rost (dangerous tidal waters).

During a visit, the public can access various historical aspects of the Sumburgh Head area including the Lighthouse Tower, Radar Hut, Smiddy, Foghorn and Engine Room, a virtual tour is available and further detail on each of the above on the Sumbergh Head website. The original Foghorn refurbishment project was completed in 2015 bringing a long lost traditional compressed air and air receiver system back to use. The Foghorn is now sounded on special occasions, there is a four minute video of the Sounding of the Foghorn on the website.

Sumburgh Head is a Site of Special Scientific Interest (SSSI) and a Special Protection Area (SPA) and the Nature Reserve gives visitors the opportunity to enjoy the beautiful sea-loving flora that thrives in the marine environment.
There are 13 designated viewing points around the Lighthouse grounds and Nature Reserve, the full details of the natural wonders that can be seen at various times of the year are detailed on the Sumbergh Head website.

Finally, the ticket office includes a gift shop giving visitors an opportunity to browse a wide range of souvenirs and handmade jewellery from local designers. The café called the Stevenson Tearoom offers spectacular views over the Nature Reserve and even more spectacular cakes!