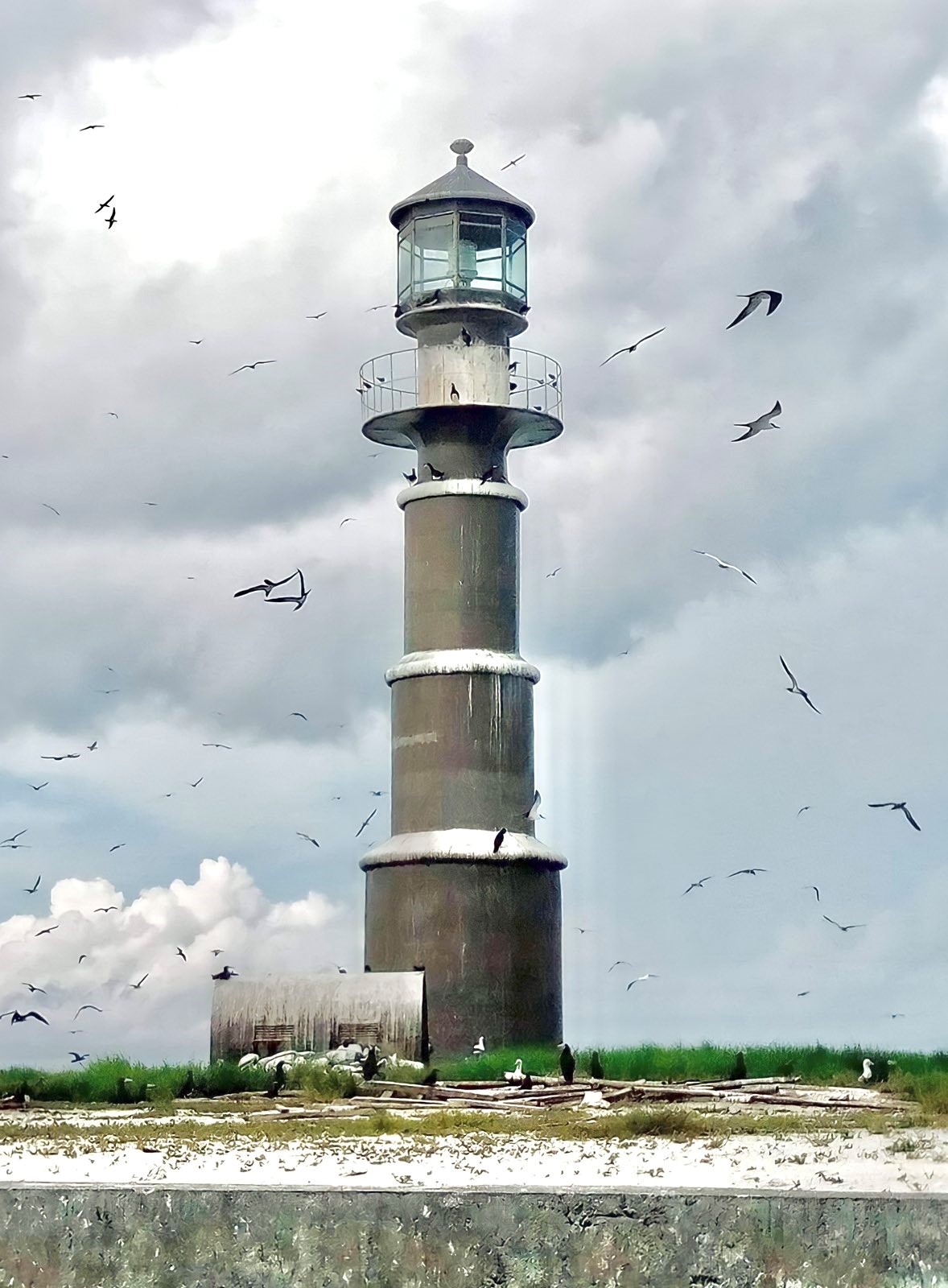 The lighthouse of Tubbataha Reefs located in Cagayancillo, Palawan is perhaps the loneliest of all the lonely sentinels of the Philippine seas. It is in the uninhabited and isolated islet in south atoll in the vast Sulu Sea. The Lighthouse Tubbataha  is one of the lighthouses built in the Philippines during the American era.

The Station was established in 1915 but the original lighthouse was erected only in the year 1938. What stands now is a concrete tower built by the Philippine Coast Guard in 1980 in replacement of the  the original wooden skeletal tower. The lighthouse is still active and in use today and the structure before has an octagonal concrete keeper’s house with 15-meter octagonal concrete tower. On 2019, the PCG built a new Glass Reinforcement Plastic (GRP) structure with the light characteristics of flashing two (2) white lights every five (5) seconds. LS Tubbataha is one of the only two man-made structures built in Tubbataha Reefs, the other one is the Tubbataha Ranger Station.

The Lighthouse Tubbataha is located at Tubbataha Reefs Natural Park. It lies at the heart of the Coral Triangle, the geographic centre of world marine biodiversity. Although the Coral Triangle covers just two percent of our planet’s oceans, it contains at least 40 percent of the world’s fish and 75 percent of corals. Studies have shown that reefs in this region are comparatively resilient to climate change. Tubbataha’s position at the centre of the Coral Triangle indicates its key role to play in marine biodiversity conservation and, ultimately, in keeping our oceans alive. Tubbataha Reefs is a strictly ‘no-take’ zone and is the largest marine protected area (MPA) in the Philippines.

The name “Tubbataha” comes from the Samal language meaning “long reef exposed at low tide”. Long before Tubbataha became well known, the Samal – seafaring people of the southern Philippines – would visit the reefs  intermittently in accordance to their nomadic lifestyle. The people who are more tightly bound to Tubbataha are Cagayanons who are the inhabitants of the neighbouring islands of Cagayancillo. Traditionally, during the summer months when the sea was calm, they would sail in their native pangko, a traditional boat and visit the abundant fishing grounds of “Gusong”, the designated local name for Tubbataha.

Over the years, Tubbataha’s isolation has become its best protection against overexploitation. Although there are two (2) islets in Tubbataha, the reefs are positioned in the middle of Sulu Sea and are far from habitable lands.  The islets have also no access to fresh water and are exposed to the tropical storms associated with the northeast monsoon from the months November to March and the southwest monsoon between July and October every year.

In the 1980’s, an increasing number of Filipino fishermen have had motorized bangkas, rather than traditional sailboats that enabled them to reach Tubbataha. To date, fish stocks in more accessible parts of the sea near the protected area are now rapidly declining due to over-fishing, whereas the Tubbataha maintains its abundance in marine life. The reefs of Tubbataha have soon become a fishing destination with many using destructive techniques, such as cyanide fishing and dynamite fishing, to maximise catch.

In 1988, in response to the strong campaign by concerned scuba divers and environmentalists in saving the area for overexploitation and with the endorsement of the Provincial Government of Palawan, then Philippine President Corazon Aquino has declared Tubbataha as a National Marine  Park through the virtue of Proclamation No. 306 – the first of its kind in the country.

In 1993, Tubbataha was inscribed by UNESCO as a World Heritage Site. It was recognised as one of the Philippines’ oldest ecosystems containing excellent examples of pristine reefs and a high diversity of marine life. It is also an important habitat for internationally threatened and endangered marine species. The islets are the only known breeding grounds for the Philippines’ endemic subspecies of Black Noddy (Anous minutus worcestri).  They are also important breeding and feeding areas for critically endangered Christmas Island Frigatebirds (Fregata andrewsi) and Hawksbill Turtles (Eretmochelys imbricata). UNESCO cited Tubbataha’s outstanding universal value as an important and significant natural habitat for in situ conservation of biological diversity; an example representing significant on-going ecological and biological processes; and an area of exceptional natural beauty and aesthetic importance.

In 1999, Tubbataha was included on the Ramsar List of Wetlands of International Importance. It was also nominated as a New Seven Wonders of the World in 2018 and remains to be the best tourist spot in the world. In November 2015, Tubbataha was declared by the ASEAN’s Centre for Biodiversity as the 35th ASEAN Heritage Park.

Tubbataha Reef is known for its extraordinary biodiversity, abundant marine life and breath-taking drop-offs into the open ocean. The area covers about 130,028 hectares of high-quality marine habitats containing three (3) atolls and a  large area of deep sea.

The area of Tubbataha was declared as Particularly Sensitive Sea Area (PSSA) by the Marine Environment Protection Committee (MEPC) of the International Maritime Organization (IMO) that has taken effect on 01 January 2018. PSSA’s are equivalent to the designation of protected areas in the context of international shipping. The designation as PSSA’s also encourages fellow IMO Member States to recognize the ecological, socio-economic and scientific criteria of the Tubbataha Reefs Natural Park area as well as its vulnerability to damage by international shipping activities.

On 01 January 2018, the Tubbataha Reef was designated as a Particularly Sensitive Sea Area (PSSA)—and an “area to be avoided”—by the Marine Environment Protection Committee (MEPC) of the International Maritime Organization (IMO). As such, public access to the area is not allowed to avoid possible contaminants to the area from the origin location of the guests such as marine debris that could be a start of a possible pollution.

As published studies of the Tubbataha National Park and its surrounding environment is available online and the access to education per se remains open to the public. The same goes to the Tubbataha Lighthouse which is located in south atoll of the national park continues to serve as a guide to the vessels navigating in the surrounding area.